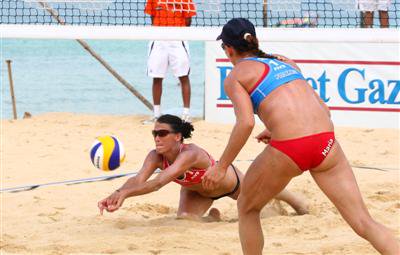 KARON, PHUKET: After the posting of the seeds for this week’s SWATCH FIVB World Tour event in Karon, pundits figured that the gold medal participants at last week’s international stop in China would face each other in the third-round of the US$190,000 Phuket Thailand Open.

Instead, only one of the final two teams advanced as expected, as Switzerland’s Simone Kuhn and Nadine Zumkehr were upset in the second-round yesterday afternoon by 24th-seeded Ying Huang and Xi Zhang of China (21-11, 11-21, 20-18) in 50 minutes.

Top-seeded defending champions Jen Kessy-Boss and April Ross of the US advanced as expected. They will play the 17-year old Huang and Zhang in an opening winner’s bracket match today.

It is the third meeting between the two sides on the tour, with the Americans winning the previous two.

The undefeated Americans advanced to today’s play with a convincing two-set win over 16th-seeded Marie-Andree Lessard and Annie Martin of Canada.

The Phuket Thailand Open is the last of 16 women’s events on the tour calendar.

Six other undefeated teams advanced to today’s competition, led by two teams from both The Netherlands and Russia along with pairs from Spain and the United States.

The Dutch duos of fourth-seeded Sanne Keizer and Marleen Van Iersel and the qualifying pair of 12th-seeded Danielle Remmers and Sophie van Gestel were scheduled to play the opening match today, with the winner advancing to the quarter-finals against either Kessy/Ross or Huang/Zhang.

Other teams with 2-0 records are second-seeded Angie Akers/Tyra Turner of the United States and 30th-seeded qualifiers Elsa Baquerizo/Liliana Fernandez Steiner of Spain.

With ninth-place guaranteed, Elsa and Liliana will post their best tour finish together to better a 13th place finish in Poland earlier this year.

Turner claimed a 2008 Phuket Thailand Open silver medal with Nicole Branagh after losing the finale to Kessy-Boss and Ross.

Sixteen other teams remain in the double-elimination competition with one defeat each.

The main draw continues through Sunday, with the semi-finals being played Saturday afternoon followed by the medal matches the next day. The winning team will split the US$30,000 (1,050,000 baht) first-place prize.

The Phuket Gazette is once again proud to sponsor this world-class event.

For the most up-to-date results and live scoring click here and here.