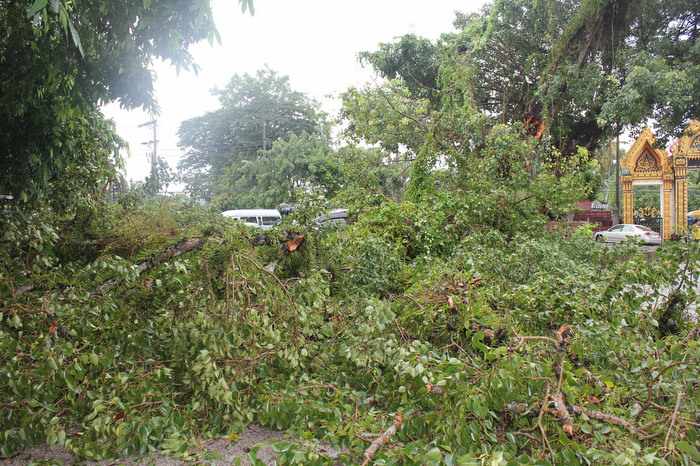 PHUKET: A father and daughter narrowly escaped injury today as part of a banyan tree – believed by Phuket locals to be 50 years old – fell on the bed of the pick-up truck they were driving in.

Phuket native Soonthorn Makphol, 40, was turning into the grounds of Wat Wichit Sangkaram on Narisorn Road in Phuket Town near his daughter’s school, Phuket Kindergarten, when the tree came crashing down.

“This was my first time parking inside the temple grounds. I normally park right outside of the school to drop my 7-year-old daughter off, but today I couldn’t find a spot,” said Mr Soonthorn.

“I was parking my truck when the tree came down on us. We are so lucky that we were not crushed by the impact.”

Phuket City council workers cut and removed the tree from Mr Soonthorn’s pick-up after the accident.

“The staff will check to make sure that no more branches will fall from the tree. Any weak branches will be removed,” said Lt Ronnaphum Permpoon of the Phuket City Police.

A similar incident happened last year when a tree believed to be 100 years old fell and crushed five cars in the car park of the Social Security office. No one was injured in the accident (story here).

Mr Soonthorn told the Phuket Gazette he would consult his insurance company to cover the damages.