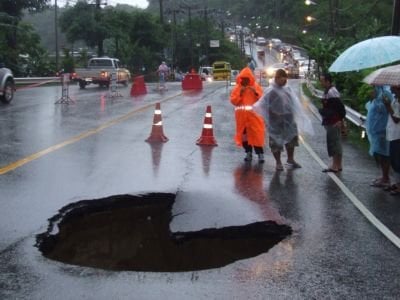 PHUKET: Police are trying to learn the identity of a Caucasian man killed early Sunday morning in a motorcycle accident on Phuket’s infamous Patong Hill road.

Kathu Police Duty Officer Nitikorn Rawang received a report of the accident at 4am yesterday. Together with Kusoldharm Foundation workers he rushed to the scene at Kuan Yang curve on Phra Barami Road where they found the body of a Caucasian man with massive head injuries.

Lying near the dead body were two injured Thai men, one of whom was later identified as Tossaphol Muangdee, 23.

Mr Tossaphol was taken to Patong Hospital. The other Thai man, whose name was not reported, was taken to Vachira Phuket Hospital in Phuket Town.

A Yamaha Fino presumably operated by the deceased and Mr Tossaphol’s Honda Click were found badly damaged at the scene. There were no helmets found in the vicinity.

Kusoldharm Foundation rescue worker “Aod”, who was at the scene, speculated that the deceased was riding uphill from Patong, approaching the San Chao Phor Suea (Tiger God Chinese Shrine), and Mr Tossaphol was coming downhill in the opposite direction when the two motorbikes collided.

The curve is a notorious spot for traffic accidents, Mr Aod added.

Most local motorbike and car operators beep their horns three times for good luck when passing the shrine, which is at the highest point on the road pass.

Anyone with possible information as to the identity of the deceased is asked to call the Kathu Police: 076-342719/21.