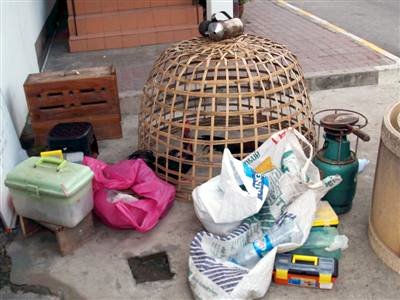 PHUKET: Forty-two people were arrested and charged with gambling following a raid at a Phuket cockpit yesterday afternoon.

Among those arrested were two women, one of whom was pregnant.

All were taken to Chalong Police Station, where they were charged and held without bail.

Seized as evidence were four fighting cocks, two of which had already engaged in battle and appeared exhausted, badly scratched and partially de-feathered. Their legs were tightly bound together, rendering them unable to fight inside the rattan cage where they were held.

Other items seized were rattan cages, a small gas cylinder, six medical treatment kits, betting lists and a number of other items commonly associated with the blood sport.

Although 42 people were arrested, they were only a fraction of those that took part.

Among those present at the Chalong Police Station were some of the gamblers who managed to escape. They had stopped by to give moral support to their less-fortunate friends.

Chalong Police Duty Office Anukul Nuket said all of those arrested would be sent to Phuket Provincial Court later the same afternoon.

The four cocks would be fed and cared for at the station, Lt Anukul said.

“Don’t worry about their future. We need to keep them here because they are our evidence,” he said.

While a number of countries have banned cockfighting citing animal cruelty, it remains popular in Thailand, which reportedly has approximately 500 cockfighting dens.

In general, gambling is prohibited by law in the Kingdom.

Cockfighting remains an exception, however. It is permitted under the Gambling Act of 1935, the provisions of which require it to take place in a sanctioned and licensed venue.

The Act states that governors have the right to legalize cockfighting dens within their province.

Cockfighting has been illegal in Phuket for the past seven years, since former Governor Udomsak Uswarangkura put a blanket ban on it out of fear it would upset tourists.