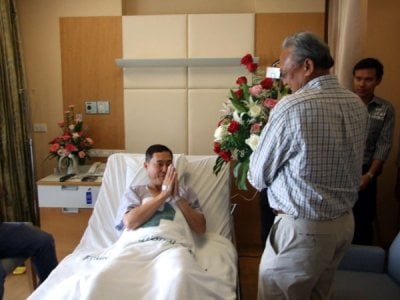 PHUKET: During a Democrat Party seminar in Phuket over the weekend, Deputy Prime Minister Suthep Thaugsuban urged fellow Democrat MPs from throughout the south to take a creative, friendly approach in trying to mend the fractious issues dividing the country.

DPM Suthep was speaking at a party seminar entitled “Join Forces and Solve the National Crisis” at the Phuket Merlin Beach Resort.

The party would hold similar meetings in other provinces nationwide, said DPM Suthep.

The Surat Thani-based politician stepped down as an MP last year after he was accused by the Election Commission of holding stakes in companies that received government concessions.

The accusation does not affect his roles as party general secretary or deputy prime minister, however.

He urged Democrats not to become separated from the people. They should not just hope that a few MPs in the province would emerge as leaders, but should show initiative by uniting the people.

They should also do public relations work and relay information that boosts reconciliation in the country, he said.

“Thailand is on the edge today. We have to follow what PM [Abhisit] said because we received his trust. All parts of the country must work together. We must not make more enemies today. We must not be enemies with government officials or people who hold different political opinions. We must draw them to support us, although blaming others is easier…Party members must explain their position to others, not criticize them. As Chuan said, the party must be strong before it can make the country strong,” he said.

DPM Suthep, in his capacity of secretary-general of the ruling Democrats, said all party members must be qualified and that a “screening process” should be conducted within 12 months to achieve that goal.

Each MP has been tasked with signing up 3,000 new party members, he added.

Key members must act like the party leader and the secretary-general, mingling with the public and clarifying information so that they understand various issues.

DPM Suthep also reminded members to pay their annual fees to support the party and help it develop.

Maj Gen Pekad is recovering from a knee-injury sustained early Saturday evening when the car he was in collided with another vehicle at Bang Khu Junction, where the bypass road branches off from Thepkrasattri Rd.

Mr Suthep presented Maj Gen Pekad with a large bouquet of flowers during his 15-minute stay.

“It’s a big honor that he came to visit and a great encouragement to do my job,” said Maj Gen Pekad.

Maj Gen Pekad, who underwent emergency surgery at the hospital, will have to wear a cast for a month to keep the knee immobilized during the initial period of healing.

There were three people in the car at the time of the collision. Maj Gen Pekad was among two who were not wearing seatbelts at the time, it was reported.