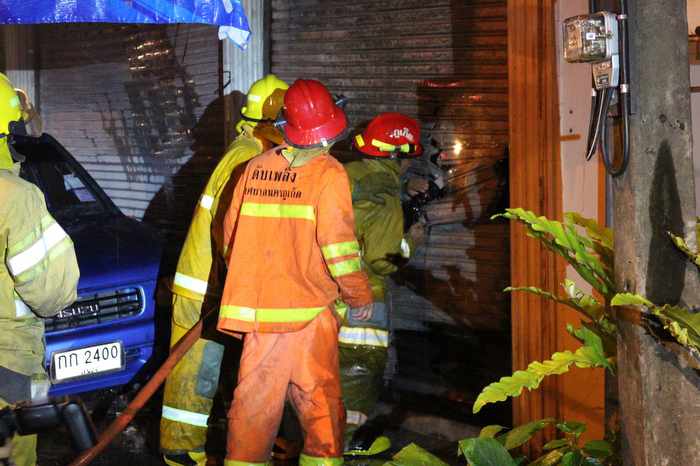 PHUKET: A family of three and one woman were found dead this morning in a smoldering Phuket Town furniture shop after firefighters spent three hours battling the deadly flames.

The family was found huddled together and the woman was found near a barred window. A fifth person, the owner of the building, managed to leap to safety from the second floor.

“She first realized that there was a fire after the smell of smoke woke her up. She tried to notify others in the building, but she couldn’t find anyone in the heavy smoke.”

Despite the Browder Life Saving net, Ms Janhorm suffered a broken arm and leg. She was rushed to Vachira Phuket Hospital after she informed firefighters that four people were still stuck inside.

Steel cages over many of the windows prevented firefighters from entering the building through alternative routes, forcing them to battle the blaze at the main door, Maj Sakchai said.

“The fire started at about 2am and wasn’t under control until about 5am,” said Maj Sakchai.

“The three bodies of the family members were found in the same place. They were all huddled together. It appeared that the father was trying to protect his son from the smoke, while the child was holding onto his mother,” Maj Sakchai told the Phuket Gazette.

The three victims had no signs of burns.

“We believe that they died from smoke inhalation,” Maj Sakchai said.

The fourth victim, Ms Thanya, was found near a barred window. She was severely burned.

The fire in the Chockchai furniture shop, located at the intersection of Srisutat Road and Amphur Road, started on the second floor of the three-storey building, and quickly spread because of the presence of highly-flammable material used for furniture construction, said Maj Sakchai.

The first to respond to emergency calls was a Phuket City Municipality firetruck that had only half a tank of water. It took another 20 minutes for five more firetrucks to arrive.

Witnesses told police that they heard what sounded like an explosion before the fire started.

“Though we have yet to confirm it, we believe the fire could have been caused by a short circuit,” said Maj Sakchai.

The estimated costs of the damage to the building is more than 7 million baht, confirmed Maj Sakchai.

The Chockchai fire marks the deadliest blaze on the island since four people were killed in a pre-dawn fire at the Tiger Bar and Discotheque in Patong (story here).

The long-awaited manslaughter trial over the deaths of the four people at Tiger Disco will begin with its first witness testimony in April 2015 (story here).

Miraculously, no deaths were reported (story here) in the blaze that ravaged the SuperCheap shopping warehouse in Phuket last year (story here). The smoldering fire left only charred remains (story here), and did at least an estimated 500mn baht in damage (story here).