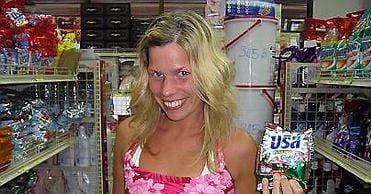 PHUKET: The family of Isabell Eriksson, a 24-year-old Swedish woman, have made a plea for information regarding her whereabouts, after receiving reports from two sources that she survived the tsunami.

Ms Eriksson was, according to her family, staying with three friends at a hotel in the Khao Lak area when the tsunami struck. The family told the Gazette that the friends last saw her shortly before the wave hit and although they managed to stay together and survived, they failed to find Ms Eriksson afterward.

However, they claim to have seen her name – written in her own handwriting – on a list of survivors posted outside Sea Dragon Dive Center in Phang Nga shortly before they were transfered out of Khao Lak to Phuket.

Other survivors, a Swedish family, said they had seen Ms Eriksson in the lobby of the C&N Hotel in Patong around noon on December 27. She appeared to be in a disturbed state of mind.

Ms Eriksson was, the family reported, “…hysterical, screaming that another wave was coming and urging people to run to higher ground.”

There have been no further reported sightings of Ms Eriksson, and the C&N Hotel could find no record of her having been a guest at the hotel.

“We are praying and hoping for everyone’s help in searching for the truth of what has happened to Isabell,” said Peter Sörensen, a relative of Ms Eriksson.

Ulf Palm, the Swedish Police spokesman in Phuket, told the Gazette that investigators have interviewed people both here and in Sweden and will conduct more interviews. “Officers are currently evaluating statements received so far,” he said.

FantaSea to close again until February