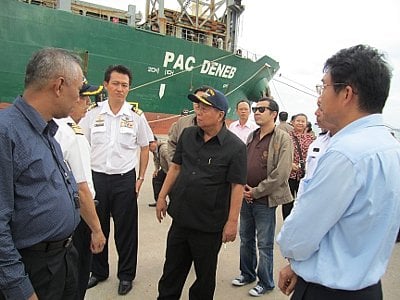 At a meeting at Phuket’s Deep Sea Port, Phuket Marine Office Chief Phuripat Theerakulpisut yesterday explained to Mr Kittisakdi that his office had been working for more than a year on having the EIA passed.

“The EIA does not seem to be working. It has caused a lot of problems,” he said.

Wathanachai Raunglertpanyakul, director of Chaophaya Terminal International Co Ltd, which has the government concession to operate Songkhla and Phuket Ports, said not one local resident has agreed with the Phuket expansion project.

“The residents are afraid that the runoff from the construction and extra activity will affect the water so much that it will affect them making a living. Not one person has agreed with the project, and so the EIA has not been approved,” he said.

Mr Wathanachai explained that the project, which was reported to cost more than 100 million baht, includes extending the dock by 60 meters so two large ships can dock at the same time.

“This involves dredging about 4,000 square meters of underwater earth. We will also install two large mooring poles in the bay,” he said.

Mr Wathanachai explained that the Phuket port was originally designed to serve cargo ships only.

“The dock is 360 meters long, which can accommodate only two ships, each not longer than 173 meters long, at the same time.

“The problem is that bigger ships are now coming to the port, especially cruise liners. So far the biggest one has been 270 meters long, which does not leave enough room for another ship,” Mr Wathanachai explained.

In keeping his commitment to support the local community, Mr Wathanachai said that cruise liners were given priority to dock at the port, even if it meant forcing a cargo ship that is halfway through loading or unloading to move offshore.

“We earn just over 100,000 baht each time a cruise liner docks here, but we earn about 500,000 baht from each rubber cargo ship that uses the port and we earn from 1mn to 1.5mn baht from wood cargo ships,” he said.

This causes problems for the owners of the goods being transported because it delays how long they must pay to use the ship, which can cost US$20,000 to US$30,000 a day, he said.

“I am afraid that if this continues, no cargo ships would come to the port,” Mr Wathanachai said.

Another problem was that government concession contracts were for periods of five years only.

“We have had the contract to run the port from the Treasury Department since 1988. The first concession was for 10 years, but since then each concession contract has been for only five years, which does not leave us enough time to invest in big projects,” he said.

After hearing all the issues currently hindering development of the port, Deputy Minister Kittisakdi said he agreed with the plans to expand the port’s capacity.

“I will present this to Cabinet and support it as much as I can. As Prime Minister Yingluck Shinawatra is supporting investment, I do not think this would be impossible,” he said.