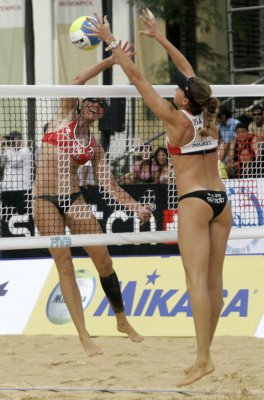 KARON: Tournament favorites Misty May-Treanor and Kerri Walsh from the US were pushed to their limits, but maintained their composure to walk away with the title and $32,000 first-prize money in the Second Phuket Thailand Open of the Swatch FIVB Beach Volley World Tour 2007 held on Karn Beach from October 31 to November 4.

Walsh and May-Treanor won the first set convincingly, winning 21-18, but as Brannagh and Youngs started to find their form, the match became fiercely contested.

Both teams demonstrated the skills that took them to the final, with a number of rallies that saw all four players spectacularly diving for the ball.

As the second set began, the rain stopped and the sun shone down on Karon Beach. Brannagh and Youngs took this as their cue to step up their game, walking over their opposition 21-16 in the second set to set up the a final-set showdown.

Walsh and May-Treanor won the toss, opting to receive. The match went down to the wire, with Brannagh leveling the score at 12-12 despite her shot hitting the net.

Walsh and May-Treanor took the next two points, but Brannagh and Youngs saved the first match point. Brannagh looked to be in some discomfort during the final set, constantly needing ice packs applied to the back of her neck after eight matches leading up to the final.

Youngs served once again to save the match, but after a brief rally, May-Treanor spiked the ball hard and killed the final point to take the title.

With US$200,000 in prize money up for grabs, it attracted the very top international teams competing and firmly cemented its place as one of Asia’s biggest beach-volleyball tournaments.

Major fire drills to be held in Phuket City