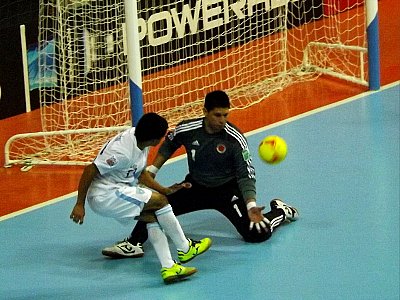 BANGKOK: The Futsal World Cup 2012 concluded the first of three rounds in the group stage, with the final eight teams in groups E and F playing their opening matches last night in Bangkok.

It was the first night since the tournament kicked off on Thursday that there were no shared points – only winners and losers.

Guatemala, Russia, the Czech Republic and Serbia came out on top of their groups to the dismay of Colombia, the Solomon Islands, Kuwait and Egypt, respectively.

Saturday’s opening match was between world-number 16 Guatemala and number 20 Colombia.

It was the second South and Central American clash of the tournament, following that of Argentina versus Mexico.

Though unlike the wide disparity seen between the Argentinians and Mexicans on Friday, last night’s match proved to be less predictable.

Los Cafeteros (the Coffee Growers) put pressure on the goal early on, with Alejandro Serna opening the scoring on 7 minutes.

Guatemala’s Jose Gonzelez equalized five minutes later, but Andres Reyes brought the advantage back to the South Americans with a goal on 18 minutes, bringing the score to 2-1 at half time.

The second half, and thus the match, was owned by the Blue and White, however, with Colombia conceding four goals to Armando Escobar, Alan Aguilar, Erick Acevedo and Walt Enriquez on 28, 30, 31 and 39 minutes.

In the second Group F matchup, world-number 8 Russia were under minimal pressure, pitted against the tournament’s second-lowest ranked side, the Solomon Islands, who stand 45th in the world.

Four years ago in Brazil, Russia set the tournament’s record when they demolished the Solomon islands by a score of 31-2.

The Reds activated the scoreboard early on with Sirilo scoring in the second minute. 37 seconds later, his comrade Pula doubled the lead.

Lima continued his goal fest with two more in the 19th minute, taking his side into the locker rooms with a luxurious 8-0 lead.

The bombardment continued with Sergey Sergeev scoring in the first minute of the second half, followed by a Robinho goal three minutes later.

The Russian contingent’s enthusiasm seemed to weaken with every goal, their echoed chants of “Rus-sia” oddly sounded like “Bra-zilia”.

A look at the Russian lineup, with names like Pula, Robinho, Gustavo, Sirilo and Lima, might cause further confusion. Indeed these five key players may have not been born and raised in Russia, but make no mistake; they have and will continue to make a name for the Russian national futsal team as one of the best in the world.

Pavel Suchilin and Alexander Fukin joined the goal fest with goals in the 26th and 27th minutes, respectively.

With strong reinforcement from the crowd, the Solomon Islanders enjoyed a few breakaway scoring opportunities in the final moments, but were unable to deliver.

In the final minute of play, it was Lima who got his 7th and the team’s final goal before the whistle sealed the 16-0 scoreline.

Following the match, Solomon Islands coach Dickson Kadau told the Phuket Gazette: “This was a good lesson for our side… We now know better which areas we need to improve on to be ready for our next two matches.”

The Gazette also caught up with Eder Lima, the top scorer of the tournament so far.

Asked if he has his eyes set on the tournament’s ultimate golden boot honors, Lima was modest: “This is not on my mind. The team winning is more important. This was a good win, but now we must look on to our next opponents, Guatemala. They will not be so easy, and we have three days to decide our game play.”

Meanwhile, the Group E matches, played at Huamark’s Indoor Stadium, saw European sides dominate their Asian and African opponents, with the Czech Republic prevailing over Kuwait 3-2, and Serbia 3-1 over Egypt.

The Czechs went up 3-0 with Marek Kopecky scoring on 4 minutes, Michal Belej on 22 minutes and Tomas Koudelka on 34 minutes.

The Kuwaitis came back with goals by Hamad Al Awadhi and Abdulrahman Altawail on 37 and 39 minutes, but it would not be enough.

In similar fashion, Serbia took a 3-0 lead over Egypt with goals by Vidan Bojovic (22 minutes), Slobodan Janjic (penalty on 36 minutes) and Maladen Kocic (38 minutes), before Egypt’s Ahmed Mohamed scored in the final minute of play.

With all 24 national teams having concluded their first match of the tournament, round 2 of the group stage will now commence, starting tonight with Group A and C matches as follows:

Group A matches will be played at Huamark Indoor Stadium, Bangkok:
5pm: Paraguay vs Costa Rica
7pm: Thailand vs Ukraine