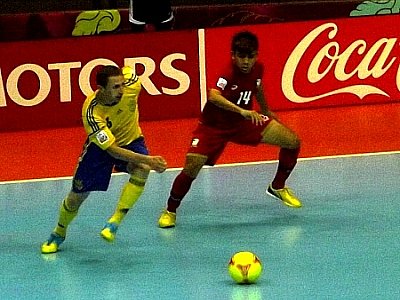 BANGKOK: Reinforced by a loud and synergetic home crowd, the ‘War Elephants’ climbed back from a five goal deficit, only to fall 3-5 to Ukraine in the two sides’ second group-stage match of the 2012 FIFA Futsal World Cup.

Played last night at a full-capacity Huamark Indoor Stadium in East Bangkok, the match’s first half was dominated by the world’s number 8, who demonstrated the value of quick counter-attacks.

The second half provided a new chapter for Thailand, however.

Three minutes into the half, Thailand was awarded a direct free kick following an aggressive challenge by a Ukrainian defender.

Kritsada Wongkaeo stepped up to fulfill his duty. His shot at first appeared to have been blocked by the keeper.

However, when the ball bounced back inside the goal line, the crowd’s energy was instantly reactivated to that of a similar state at the start of the match.

Thailand pressed on, boxing out in the center nicely to draw several fouls from Ukraine, who by the 14th minute of the half, had broken the 6-foul threshold, yielding Thailand a direct penalty kick.

Suphawut Thueanklang did not miss his mark, and with six minutes to play – more than enough in futsal – the roaring crowd was on their feet.

Controlling possession, the Thai offensive front continued, with an attacking keeper alternating in and out of the pitch to offer an extra man advantage.

Ukraine kept in their defensive formation, hoping to seize on counter attack opportunities at the unguarded goal, but it was Thailand’s Jirawat Sornwichian who got scored with a strike on 38 minutes.

Ukraine quickly tightened up their defense, and despite many shots, Thailand was unable to continue their comeback.

Following the match, Thailand Coach Victor Hermans told the Gazette that the game was lost due to his side’s mistakes in the first half.

“We didn’t play according to the plan we agreed on. This was to control the game and not be too eager and allow them [Ukraine] to counter attack, and that’s what happened,” he remarked.

“The first goal was unlucky for us, but still I always say that the end result will be finalized in the second half, so it’s important to stay in the game early on. With only three minutes left in the first half, we were down 3-0 but still could not calm down. The players wanted to score, but instead got beat with more goals on the counter attack.”

The loss puts Thailand into 2nd place of Group A, while Ukraine moved to the top.

Thailand’s next and final match of group stage is this Wednesday against Paraguay, who now sit at the bottom of the group after they were defeated by Costa Rica 6-3 earlier in the evening, despite having a 2-0 advantage at half time.

Indeed Costa Rica’s shock second-half, 6-goal comeback reinforces what Thailand Coach Hermans said about the second half in futsal – that is when a game is finalized.

Likewise, in the evening’s first of two Group C matches played in Nakhon Ratchasima, Asian champions Japan climbed back from a 5-2 first-half scoreline to draw Portugal 5-5 – yet another testament to second half finalization in futsal.

The other match saw defending champions Brazil dominate both halves of their match against Libya with a score of 13-0, five of which came in the first half.