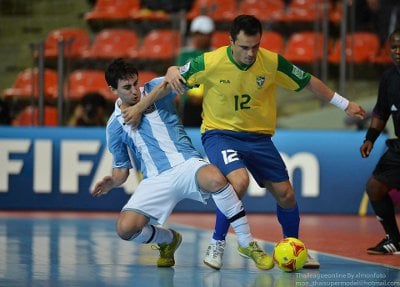 In the first match of the evening, Brazil came from behind to claim a hard fought victory against Argentina in extra time.

Relishing the return of key player, Falcao, Brazil were the favorites, but it was Argentina who took an early 2-0 lead.

Brazil fought back and equalized to take the game into extra time, in which Falcao scored the winner.

The shock of the evening was served up by Colombia, who knocked out Ukraine with a 3-1 scoreline.

In the second round of the tournament earlier this week, Colombia upset Iran with defensive play and the South Americans used the same tactic against the much fancied Ukraine.

The ‘coffee growers’ sat back for large periods of the match and soaked up Ukrainian attacks, hitting the Europeans with counter play.

In Andres Reyes, they had a player who could turn the game, and he did.

Reyes scored Colombia’s first goal after the third minute of the second half and as Ukraine pushed for an equalizer they sacrificed their keeper for an outfield player.

This tactic back fired as Colombia scored two quick fire goals in the 39th minute to take a 3-0 lead.

Ukraine scored a consolation goal but it was too little too late.

Like Brazil vs Argentina, the second match that was decided in extra time was the Portugal vs Italy.

Portugal raced into a three goal lead in the first 12 minutes of play, courtesy of a Ricardinho hat trick, maintaining the advantage into half time.

This early setback forced Italy into action and they responded by fighting back, bringing their keeper out of the nets to pressure Portugal’s defense.

Unlike Paraguay’s similar attempt to comeback against Portugal in the round of 16, the power play tactic worked for Italy, who scored a last minute equalizer to take the game into extra time and eventually win the game 4-3.

In the final match last night, Russia took an early lead against Spain, but three goals in 15 minutes turned the game in Spain’s favor.

Russia had not conceded a goal all tournament but Spain proved to be too strong and ran out winners 3-2.

Both semifinals will be played on Friday, November 16 at Bangkok’s Indoor Stadium Huamark:

Aussie balcony plunge survivor on the road to recovery