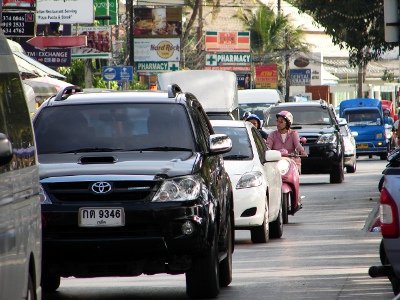 PHUKET: The owner of a small car rental outfit in Phuket is demanding insurance compensation for a car allegedly stolen by a Singaporean tourist, but the claims adjuster says none will be forthcoming.

Somjit Prayunsri, 50, went to Patong Police Station yesterday to check if there had been any progress in the investigation into a Honda Jazz that she reported stolen last November.

The black car, with Phuket license plate Kor Tor 4359, was rented out for one week to a Singaporean man who signed his name on the rental agreement as “Lim Yew Tze”.

Ms Somjit believes she is entitled to 450,000 baht in compensation from Chartis Insurance Company (Thailand) Ltd, with which she had insured the vehicle.

“The company informed me that the claim was still pending because police have taken so long trying to track down Mr Lim through the passport number provided. Actually, I should have received compensation within 45 days of placing the claim,” she said.

Ms Somjit, who has been in the car rental business for 10 years, is now down to four vehicles to rent from her location on the beach road in Patong, opposite the Holiday Inn.

“This is the first experience I’ve had like this,” she told the Phuket Gazette.

Car rental is a big business in Patong because of the lack of public transport and the prohibitive fares charged by local tuk-tuk drivers, which Australian Ambassador to Thailand James Wise recently said were six times higher than in Bangkok on a per-kilometer basis.

Patong Police Duty Officer Jongserm Preecha told the Gazette an arrest warrant was issued months ago for the Singaporean, who is still believed to be somewhere in Thailand.

Chartis Insurance claim assessor Pongpan Promjina told the Gazette that Ms Somjit’s failure to copy Mr Lim’s passport was part of the reason for the delay.

“All we had to go by was the passport number he wrote on the rental agreement. Police finally provided us with the number and we were able to verify that it was correct, and we based our decision on that,” he said.

The decision: no compensation.

“The company has already written an official letter informing Ms Somjit that she is not entitled to compensation… She should get it [the letter] on Monday,” said Mr Pongpan.

“The policy clearly states in its main body that the company is not responsible for losses to a vehicle while it is on rent to a third party. We would advise car rental operators to study the terms of their policies carefully.

“We had already told her, unofficially, that she might not get any compensation,” he said.

“After she gets the official notice, if there is anything she doesn’t understand she can take legal action and we will explain everything to the court,” Mr Pongpan added.