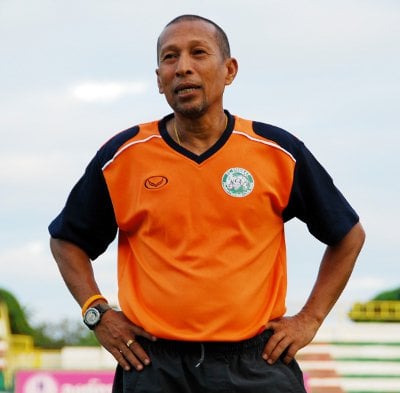 PHUKET: An appeal by FC Phuket to be allowed to play their last home match of the season at Surakul Stadium has been approved by the Football Association of Thailand (FAT), but only under the bizarre proviso that home-side fans not be allowed to cheer their team in any way.

“Fans will only be allowed to sit still. There can be no wearing of FC Phuket shirts or other gear, no singing or chanting, no drumming, no cheering the team on whatsoever. This is in order not to put pressure on the Bangkok FC’s players,” Assistant Coach Apichart Mosika told the Gazette during the team’s first post-holiday training session at the stadium.

The appeal followed a ruling by the FAT board that the team lose its right to host the match following the team’s December 21 home loss to Suphanburi FC, after which the referee, surrounded by a contingent of furious FC Phuket supporters, was not allowed to leave the pitch.

FAT earlier ruled that FC Phuket would have to find a neutral pitch to play the match.

FC Phuket successfully argued that this was unfair because the ban affected their last home game of the season, when it should have been applied to the following match against Air Force United.

Meanwhile, ten players took part in Monday’s workout, including a surprise showing by goalkeeper Jonathan “John” Matijas, whose contract with the team expired on December 31.

“This is my last day here. Tomorrow I will fly to Bangkok to look for a new team. Anyway, I will come back here for vacation for sure,” the Frenchman said.

Also taking part were two Nigerian players who arrived to show their skills to the FC Phuket coaching staff.

Oniovokukor Akpos Joseph, 26, just ended a contract with Phayao FC in the Division 2 Regional League, while his friend Ike Michael, 27, two years ago played with former Division 1 side Prachinburi FC.

With the league drawing to a close, Saturday’s opponent Bangkok FC are currently 12th in the table, three places behind FC Phuket. The Southern Sea Kirin, or those of them that are left, will be looking for some payback after Bangkok FC crushed them 5-2 in their first encounter in April last year.

That match was called six minutes short of time when a high-powered squall hit the Bangkok pitch where the game was played. It was later discussed that, in order to save on expenses, the final six minutes be played in Phuket before Saturday’s match.

However, FC Phuket later conceded the 5-2 defeat, thus eliminating the even more bizarre scenario of fans being able to cheer as normal during six meaningless minutes, then having to suffer in silence during the more important 90-minute match that would follow.

With no cheering and many core foreign players gone, it could be a strange finale indeed at Surakul Stadium on Sunday.

Fans are invited to attend and stare in zombie-like silence as the final season match of the year takes place on Saturday. Kick-off is at 6pm.