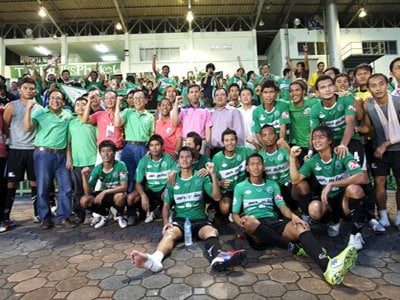 PHUKET: The FC Phuket bandwagon will make its final stop of the season tonight against Buriram in the Thai League Division 2 playoff final, at Suphachalasai Stadium in Bangkok.

Kick-off is at 6pm. The game will be broadcast live on the T-Sports Channel, available on True Visions and on Phuket Cable’s channel 58.

Phuket finished atop Group B of Division 2 after coming from behind to defeat Samut Prakan on home turf last Saturday to set up the showdown with Group A kingpins Buriram.

Striker Thawin Bootsombat was the hero for Phuket in that game. His two second-half goals sealed a famous 2-1 victory and ensured the team’s promotion to Division 1.

Although both teams are already guaranteed to be playing Division 1 football next season, the winner of tonight’s game will be crowned overall playoff champion and receive the handsome reward of 1 million baht.

Should Phuket lose the game they will still be awarded 500,000 baht.

Approximately 200 Phuket fans have made the trip north to the capital for the epic encounter.

Meanwhile, looking ahead to next season, the new Division 1 season has been penciled in for a mid-February start, with fixtures and dates to be announced shortly.

An FC Phuket spokesperson confirmed to the Gazette that decisions on which loan players from this season will remain at the club for next term will be made after the game with Buriram tonight.