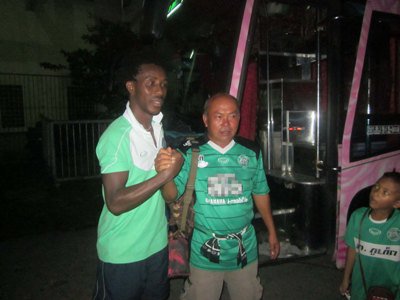 PHUKET: FC Phuket will host PTT Rayong FC this Sunday evening at Surakul Stadium in a match sure to set the tone for the remainder of the Southern Sea Kirin’s season.

Kickoff is set for 6pm.

The last time the two sides met was back in April in Rayong.

In that match, PTT Rayong “Fire Power” won with a single goal scored in the 47th minute by Brazilian midfielder Diego Martins. To read the full report for that match click here.

Phuket look to avenge that loss on Sunday which would extend their winning streak to four games, and keep a forward momentum in their premier league promotion campaign.

PTT Rayong – not to be mistaken with Rayong FC who play in the division two AIS league – last Sunday defeated Suphanburi FC 1 – 0, and are currently in 5th place of the TPL Div One rankings with 38 points from 10 wins, 8 draws and 5 losses.

While Buriram FC, Chula United (BBCU) and Chainat FC maintain the top three league places and a foot in the door for promotion, for now, the contest is still within reach for a handful of teams, including Phuket.

This weekend’s TPL Div One league action resumes on Saturday with three matches.

Starting at 4pm, Bangkok United will look to secure three points albeit an away match against 15th place JW Rangsit.

With the aftertaste of their home loss against Phuket lingering, Songkhla are up in Bangkok for a 6pm match against BBCU at the Army Stadium. In a must-win match that may likely see more visiting fans than home fans, the Southern Fighting Bulls will look to deliver Big Bang Chula United what would be only their 3rd loss at home this season.

Such an accomplishment has so far only been achieved by league leaders, Buriram FC and most recently, Chainat who beat Chula by a single goal on Wednesday.

Meanwhile, the Buriram “Volcanoes” should maintain their impressive record of being undefeated at home when they play 13th place Samut Prakarn Customs United (not to be mistaken with Samut Prakarn FC, playing in the Div Two AIS league). Their match is scheduled for 6pm match at the recently-built I-mobile Stadium

In addition to Phuket and PTT Rayong’s match, five other TPL Div One league matches will be played on Sunday as follows:

For the latest results and fixtures, be sure the check Phuket Gazette online regularly and pick up the latest copy around the island.

As this is the monsoon season, rain is a high probability so show up early for dry seats at Surakul, otherwise bring an umbrella.

Pattalung fans were thrilled after their side on Wednesday beat reigning Toyota League Cup champs, premier league side Thai Port FC 1 – 0 in a second leg semifinal in Pattalung on Wednesday.

Despite the win, it will be Thai Port who advance 3-1 on aggregate to the tournament’s finals. Their opponents will be either Buriram PEA or Chonburi FC, to be determined in what will be a sell-out match on Sep 30 in Chonburi.

Buriram PEA won the first leg match on Wednesday 1- 0. If they draw or win Chonburi next Friday, they will advance to the finals for a repeat of last year’s and a chance of revenge, as Thai Port took the honors then winning 2 – 1.