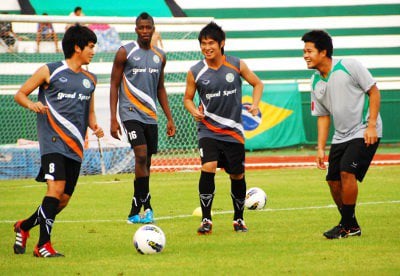 Kickoff for the match, to played at Suzuki Stadium, located about 20 kilometers north of Pattaya, will be at 6:30pm.

Now in 11th place of the 18-team TD1, with a win, four draws and two losses, Phuket have their work cut out for them.

Their opponents, also known as the “Blue Marlin” were relegated from the Sponsor Thai Premier League following last season, but are holding their own in fifth place in TD1 with three wins, a draw and two losses.

The last time the two sides met was in the Toyota Thai League Cup round of 16 in July last year.

Phuket were victorious following a 1-1 home-leg draw and 2-3 away-leg triumph, with the Southern Sea Kirin advancing 4-3 on aggregate thanks in part to a 93rd minute goal by Kone Adama.

Following that upset, Phuket went on to be knocked out of the cup’s quarter finals by Southern rivals Pattalung FC.

Though no trophy is on the line for tonight’s rematch, both sides will be shooting for nothing short of a victory.

If Phuket prevails, it would be their second win on the road and overall this season, complementing their victory in Nakhon Ratchasima in March.

Meanwhile, British International School (BIS) has agreed to support FC Phuket by allowing the team to train on the school’s pitch twice a week.

FC Phuket Director Soranan Sanae told the Phuket Gazette, “We just had a meeting with the school director [last Tuesday] and they will allow us to train there, which should be Tuesdays and Wednesdays.

“Since the National Youth Games will be from May 26 to June 5, we had to find a new pitch to train at for home games,” he explained.

After their match on Sunday, Phuket will promptly return home to play a special friendly match on May 2 against Myanmar league leaders Yadanarbon FC – the team which Kone Adama currently plays for.

Kickoff for that match, to be played at Surakul Stadium, will be at 4pm.

Like Phuket, Yadanabon FC is also a club partner with Thai premier side Muangthong United.

Phuket rolls on into ‘Doomsday Saturday’