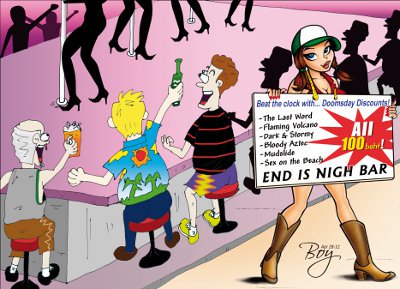 PHUKET: There never seems to be a dull moment covering the news in Phuket, and the rumor-mongering that followed the recent seismic activity has been particularly captivating.

A basic review of facts: an 8.6-magnitude earthquake off the coast of Sumatra on April 11 prompted the National Disaster Warning Center (NDWC) to issue an evacuation of tsunami-risk areas. A total breakdown in mobile phone networks, coupled with a second quake and the glaring failure of the state-run media to convey timely information, led to unnecessary confusion and fear.

Despite the chaos, there was only one casualty: a Dutch tourist who died of apparent blood loss in his hotel room after refusing to seek medical treatment for a head wound received in a motorbike accident.

On April 16, the first and strongest earthquake struck in Thalang with a magnitude of 4.3 on the Richter scale. Although no evacuation was ordered, this triggered a second “unofficial” evacuation in some areas that put many people at unnecessary risk once again. Still, no loss of life was reported and property damage was minor, even near the epicenter.

The series of much smaller tremors that followed continued to keep people on edge. This set the perfect atmosphere for rumors of Phuket’s imminent destruction to spread quickly across the internet, eventually finding their way into print in the form of leaflets distributed in Thalang. (See pages 4-5, current issue of the Phuket Gazette. Digital subscribers click here to download the full newspaper.)

The Gazette understands the human propensity to fear the unknown and appreciates that the advent of seismic activity where it has long been dormant is bound to create some apprehension.

The reality, however, is that no person can accurately predict where and when an earthquake will strike – a fact that any seismologist would be quick to confirm.

Doomsayers have been part of the lunatic fringe from time immemorial. In this case we suspect their numbers may have been supplemented by real estate speculators seeking to cash in on ignorance-based fear.

With skyrocketing land prices on the island, and the superstitious nature of many of those who hold it, the recent tremors may have provided the perfect opportunity for speculators to spread disinformation in order to snatch up valuable real estate at ‘fire sale’ prices.

If this was indeed the real motivation, we find it particularly repugnant that the bodhisattva Guanyin, venerated by many Thai Buddhists as a source of compassion, was named by some of the pamphleteers as the source of the warning.

One final word of caution for those heading out to enjoy any of the “end of days” parties taking place this weekend: never forget that our roads are where the real danger lies.

PHUKET OPINION: Few winners in war against the sea