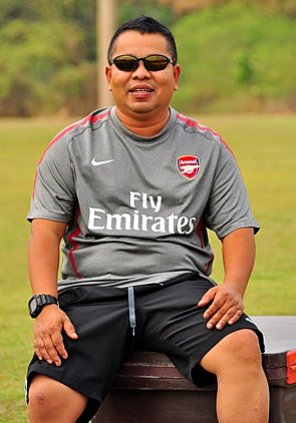 PHUKET: FC Phuket Director Soranan Sanae has sent out a distress call to all wealthy football fans in Phuket to come to the rescue of the team, which is in urgent need of sponsorship, yet again.

“If any football-loving foreigners or expat millionaires would like to support the team, they are more than welcome to step up,” he told the Phuket Gazette yesterday.

“I have a letter in my hand right now. I have yet to know what to do, and must discuss this matter with the club’s president Ko Lek before I give any [in depth] interview,” he added.

The letter in his hand was from Cournot and Nash Co Ltd, the marketing firm that manages Thai Premier League (TPL) side, Muangthong United – FC Phuket’s ‘big brother’.

Circulating around the team’s Facebook fan forum all day yesterday, and stirring up what can only be described as a cyber soap opera, the letter was an official notification from Cournot and Nash plainly stating that it will no longer provide FC Phuket with financial and administrative support.

The bad news comes only weeks after fans were given good news that the major marketing firm had agreed to provide financial and administrative support to FC Phuket, which would have allowed the team to survive and compete in TPL Division 1 for the 2012 season.

However, with this latest development, fans have returned to their old misery knowing that FC Phuket yet again faces the threat of being dissolved into professional extinction.

The Gazette has learned that the letter was sent to team executives after Muangthong United’s board failed to reach an agreement with local Phuket authorities about the usage of Surakul Stadium as a host pitch and training base.

“Muangthong United have officially withdrawn their intention and right to [financially and administratively] support FC Phuket following a disagreement with the Phuket Provincial Administrative Organization (“OrBorJor”),” he said.

Club consultant Paitoon continued, “I, on behalf of FC Phuket, had already talked on the phone with OrBorJor President Paiboon Upatising but we could not come to an agreement because the OrBorJor needs to charge a facilities rental fee at a rate of 10% of each game’s gate receipts.

“Muangthong United’s executives decided in a meeting that this was unfair and too much of a burden for them. They then agreed to cancel financial support for FC Phuket, and have already submitted a formal letter returning all management rights of the team back to FC Phuket.”

Consultant Paitoon added, “In fact, there is no need for Muangthong United [Cournot and Nash] to help us because they already have their own club. To help us is a big burden for them. But because I am a Phuket resident, and have been working with Siamsports [which falls under Cournot and Nash] for 26 years, I, along with Narubas ‘Ko Lek’ Aryupong, asked them for support to please all the fans.

“Rawi Lorthong [Head of Cournot and Nash] felt sympathy for us and then agreed to help us retain the team and right to play in Division 1, because it was such hard work to bring the club to Division 1,” he said.

“They had set a budget for FC Phuket at up to 36 million baht, even though [most] Phuket people don’t care for football. However, they’ve decided to cancel support,” he said regretfully.

Meanwhile, PPAO president Paiboon Upatising told the Phuket Gazette that there has been no formal meeting between the OrBorJor and Muangthong United, but that it simply was impossible for the OrBorJor to approve their request to use Surakul Stadium free of charge.

“Surakul Stadium belongs to all Phuket people. We cannot allow any private club to use the facility for free. Since FC Phuket is under the management of a private company, they have to come talk in detail about the rental and ticketing fees,” he said.

In other team news, Muangthong United executives earlier this week selected 11 of FC Phuket’s prime players to join a special training session. Despite the latest bad news, the training session will still take place, the Gazette has learned.

Phuket club director Soranan Sanae earlier in the week told the Gazette, “The selected players have about two weeks to prove themselves. The most outstanding one will be selected to play with Muangthong United and the rest will remain with FC Phuket [if the team is not dissolved]”.

Thawin Butsombat, the forward who suffered a broken leg in a match in May last year against Thai Honda FC, has had interest shown by Division 2 side, Rayong FC, which former Phuket coach, Apichart ‘Mo’ Mosika is now managing.

Former Phuket forward Kone Adama is playing in the Burmese league for Yadanarbon FC, while former Phuket goalkeeper, Jonathan Matijas is still seeking to sign with another team. At the time of going to press, the Frenchman was trying out for Division 1 side, Bangkok United, formerly Bangkok University’s football team.

For the latest developments on the FC Phuket saga, keep checking our website or join as a Gazetteer and receive email alerts.

Phuket likely to get Administrative Court