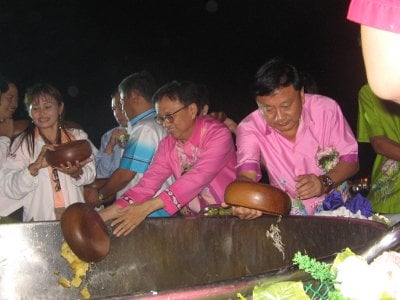 PHUKET: The 4th annual Phuket Local Food Festival kicked off at Saphan Hin in Phuket Town last night with the preparation of what is purported to have been the world’s largest pot of tom som (sweet and sour soup).

The event was officially opened by Phuket Governor Tri Augkaradacha, who joined together with Phuket Provincial Administration Organization (OrBorJor) President Paiboon Upatising in preparing the colossal cauldron of soup, which measured about two meters across.

After that there was a cooking demonstration and competition to see which team of cooks could pound out the best serving “Phuket-style” somtam, followed by stage performances by local students.

The nearby Phuket Vocational School has on display a variety of exhibits, including a number of “living mannequins” covered from head to toe in greasepaint and dressed like coolies from Phuket’s tin mining era.

Tourists lined up to have their photos taken in a variety of old style rickshaws and a restored OrBorJor Pho Thong (songthaew bus) people mover decorated with flowers and painted pink.

One expat at the event last night told the Phuket Gazette, “This is my favorite event of the year because the focus is on the food, which is clean, delicious and very cheap.

“Even if you came here every night, it would be impossible to try it all because there are well over 100 stalls. I also like it more than the Red Cross Fair because it is more laid back, easier to find parking. There is no alcohol on sale, but nobody hassles you if you bring your own,” he said.

The fun continues from 4pm to 10pm today and daily through Sunday.

Man shot, dumped, left for dead – but survives in Phuket