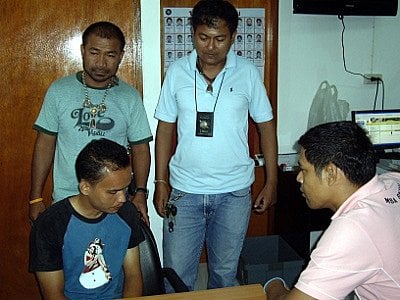 PHUKET: A hotel handyman has been arrested for the alleged rape of a British woman at a Phuket hotel last weekend.

The victim, a 32-year-old British woman, reported the case to Patong Police at about 1:30pm on Saturday.

She traded punches with her assailant and managed to fend him off, but not before he ejaculated onto her bedsheets, she told police.

An immediate investigation led by Maj Thammasak Boonsong of the Patong Police led to the arrest later the same day of Suppachai Jongkonpued, a 27-year-old native of Nakhon Sri Thammarat, employed by the hotel as a repairman.

The woman, whose name was withheld to protect her privacy, had been living and working in Patong for about six months, Maj Thammasak said.

Evidence collected in the case includes stained underwear and photos of bruises to the face of Mr Suppachai, who will likely face minimum charges of attempted rape.

Martin Carpenter MBE, British Honorary Consul for Phuket, said the British diplomatic mission was aware of the case and was assisting the victim.

Pro Am golfers ready to drive off in style