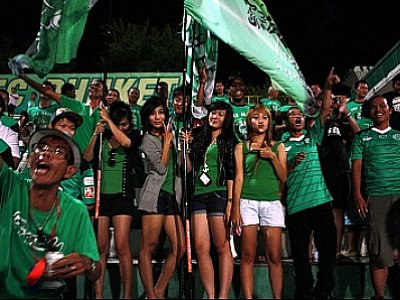 PHUKET: Recovering from their disappointing home loss last week, FC Phuket traveled to eastern Thailand on Saturday where they managed a draw against Chantaburi FC.

The 12th-place Chantaburi “Hares”, who drew against Suphanburi FC 2-2 in an away game last week, were not to be taken lightly on their home turf.

A lethargic 45 minutes and several poorly missed opportunities from both FC Phuket and Chantaburi FC saw the squads retreat to their dressing rooms, undoubtedly for a dressing down after a scoreless and uneventful first half.

The scoreboard eventually flashed to life in the 50th minute to the dismay of the home crowd. FC Phuket’s Sarach Yooyen swung a dangerous free kick in from the left which caused a flap in Chantaburi’s defense.

Kone Adama managed to deflect the cross into space where Sutee Sakdiwong picked up on the loose ball and drilled his header home to put FC Phuket a goal in front.

FC Phuket held their lead for only 17 minutes, when in the 67th minute the Hares’ Phromphong Kransumrong outpaced Phuket defenders, latched on to a perfectly-weighted pass and side-footed his effort past the outstretched Phuket goalkeeper to level the scores.

While livening up the home crowd, the equalizer could not inspire victory and the score remained 1-1 until the final whistle.

In other Division 1 matches played over the weekend:

With 19 points, Phuket now sits in 8th place and are preparing for a challenging match this Sunday with Buriram FC, currently in 2nd spot. The game kicks off at 6pm at Surakul Stadium.