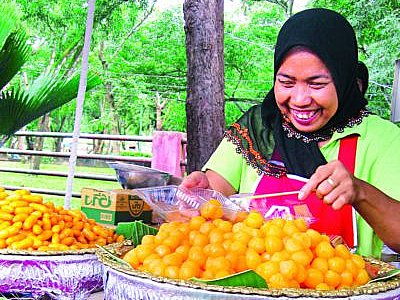 PHUKET: Phuket Town’s plan to apply for listing as a UNESCO “City of Gastronomy”, if carried out, would be one of the more rational overtures put to the United Nations (UN) by Thailand in recent years. But it’s premature to think that we’ll soon be seeing a wave of ‘gastro-tourists’ coming to Phuket to sample the local cuisine.

[See story, page 10 of the current issue of the Phuket Gazette, on newsstands today throughout the island. Digital subscribers click here to download your full newspaper.]

While Phuket Town does indeed have some interesting culinary offerings, especially when cost is taken into account, we’re not sure that the plastic table and pink paper napkin category is ready to relinquish its dominance of the ‘downtown’ dining scene. More comfortable venues with international (rather than just regional) fare – and without the cacophony of Kenny G and motorbikes – come into play once we leave the city limits and enter the rest of the island.

Hygiene is another area that bears watching, despite the cheerful little plastic signs announcing “Clean Food Good Taste” in so many Phuket Town restaurants. Why is it necessary to give such assurances?

A look at the UNESCO website specifies eight criteria for listing in the ‘Creative Cities Network’. Phuket Town would pass some of the requirements with flying colors. For example: “A tradition of hosting gastronomic festivals, awards, contests and other broadly-targeted means of recognition.” For this, think of annual events such as the Vegetarian Festival, the Saphan Hin Local Food Fair and other mass-market gastro-frenzies.

But if the UNESCO judging panel were to scuttle Phuket City’s application, it would most likely cite requirement Number Seven: “Respect for the environment and promotion of sustainable local products.”

A handful of cheap OTOP items would not likely obscure the facts that Phuket generates over 250 tonnes of solid waste a day and continues to suffer from land encroachment, hillside deforestation and an appalling lack of adequate sewage-treatment facilities.

But one never knows. The UN likes Thailand, that’s for sure. Its massive facility in the heart of Bangkok is home to some 25 different UN agencies, many of which are regional in their responsibilities.

With so many UN staffers in the capital, Phuket is the perfect getaway for scores of international bureaucrats. One can only speculate that it was this fact, not the actual situation on the ground in Patong, that led a UN committee to name that town a “role-model city” for disaster-management planning, in October last year.

Cynicism aside, we think UNESCO listing of Phuket Town as a “City of Gastronomy” would be a very positive development for the whole of Phuket, one that would resonate well with our current dining infrastructure.

Consider the array of mid- to upscale options already available throughout the island – not only the lavish wine dinners, bountiful brunches and other epicurean opportunities in the four- and five-star hotels, but also the abundance of fine independent restaurants offering international and ethnic specialties from all over the world.

So if we accept the benefits of cluster marketing as a reality, then UNESCO recognition of our main town’s kitchens would almost surely enhance Phuket’s growing image as a great place to eat.