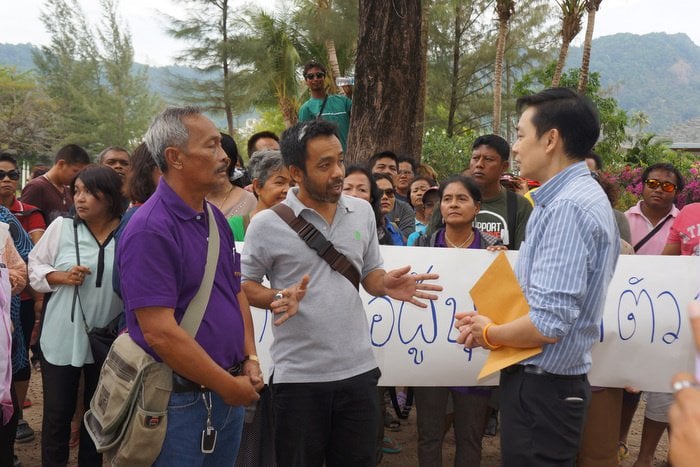 PHUKET: A group of about 30 beach vendors interjected themselves into an inspection of Kamala Beach yesterday to submit a complaint letter to the Deputy Permanent Secretary of Justice, who was visiting Phuket for a property development investigation.

Deputy Permanent Secretary of Justice Dussadee Arayawuth came to the island to inspect four of 20 land plots believed to have been obtained through illegal land-title deeds or illegally developed (story here).

However, the beach vendors were waiting for him when he arrived with his team at Kamala Beach.

Mr Manas also expressed his confusion over the decisions made by Governor Nisit Jansomwong about the beach policy.

“First, the governor ordered the rented sunloungers off the beach. Now, tourists cannot even bring their own chairs. I cannot understand this,” he said.

“This is a huge mistake. It makes Phuket look like it does not welcoming tourists anymore.”

Another vendor present asked that Governor Nisit adjust the beach rules in favor of locals.

“Phuket makes a huge amount of money for Thailand. Tourism provides income for locals. Now, the tourists are not coming,” she said.

“We ask that the governor change the beach rules so that they help the locals rather than the big hotels.”

Col Dussadee accepted the letter and told the vendors that he would speak with the governor himself.

“The governor has his reasons for these rules. This is not about the locals, tourists or the governor, this is about law, policy and order,” Col Dussadee said.

“I will take everything into consideration and speak with the governor.”