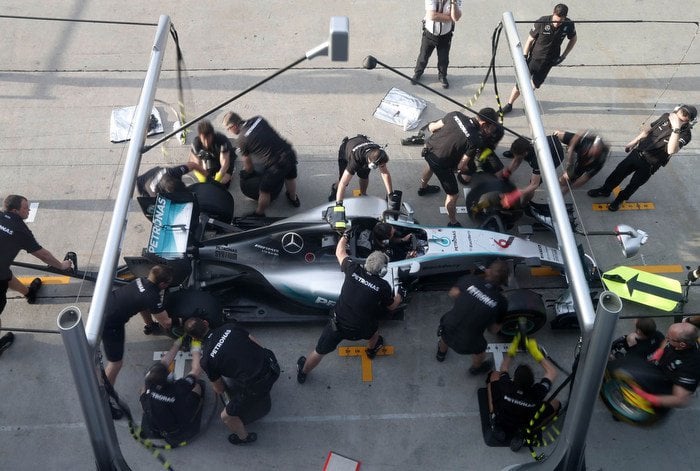 PHUKET: Well, my forecast for the Australian GP was on the money: Mercedes, Mercedes, Sebastian Vettel.

In Melbourne, the Mercedes were 30 seconds ahead of the best of the rest. The real problem is that I believe that their engines had been tuned-down, and that there was another 60 seconds in reserve. Now that is dominance – and it’s not good. On that basis, Mercedes is going to win every race, barring accidents, gremlins or great leaps forward.

It’s really a question of how many races Nico Rosberg can steal from Lewis Hamilton. That’s likely to be several, but not enough to take the championship. Nonetheless, Sepang might be one of them. However, Hamilton won here last season, and gremlins apart, it would be a surprise if he was forced to cede to Rosberg this year.

Sepang is the longest race of the F1 season in terms of distance. The track is virtually unchanged from last year, so Pirelli has again brought hard and medium compound tyres. The 2014 race was won using a three-stop strategy, with most cars running a short final stint on the hard tyres. It is probable that this will remain the favorite strategy. If so, look to the pits being visited on laps 10-14, 30-33 and 47-50 – that’s where the race could be settled.

Behind the Mercedes in Malaysia, the peloton should largely be composed of Williams, Ferrari and possibly Red Bull cars.

I have a feeling that the circuit is going to suit Williams better than Ferrari, so I will pick a Williams driver for the podium, most likely Felipe Massa. Red Bull could be threatening, if they can get their mechanical systems sorted out, and have the Ferrari drivers looking in their wing mirrors, but I think Daniel Ricciardo probably won’t manage it this race.

McLaren is looking very sorry indeed. Two weeks ago Jensen Button nursed a very sad looking MP4-30 around Albert Park to actually finish, and he will probably do the same in Malaysia. I do not think McLaren will dare turn the Honda engine up to full capacity. Fernando Alonso has been sounding quite leery about the machine, and I would not be surprised to see him retire. Right now McLaren just needs to beat Marussia to avoid the laughter from the pits. They should manage that, but Marussia might actually get cars on the grid at Sepang, which is better than their Australian flop. Of the rest, Torro Rosso looks best placed to do something.

A Safety Car is unlikely at Sepang due to the width of the track and the amount of asphalt run-off. That does tend to make the race a bit predictable. But of course, there is the weather to consider. Sepang will be hotter than Melbourne and better suited to the tyres. The ambient temperature is usually around 30 degrees, with 90 per cent humidity, which makes it hard on power units – expect retirements. And, there is always the likelihood of rain to add spice to strategy, and maybe help the best drivers. In fact the Malaysian race seems to be arranged specifically to maximize the chance of a wet race, which is great, except for the fact that Sepang is also liable to flood.

Bernie Ecclestone is the man everyone loves to hate, but he has proved himself unerringly correct when it comes to F1. He railed against the International Automobile Federation (FIA) rule changes last year that saw new power systems being demanded at immense expense, just as everyone was feeling the financial pinch, and he sneered at the new inaudible engines. Can he do something now to bring the circus back onto the track? No one wants to see foregone conclusions, unhappy drivers, mutterings of foul play, an illustrious circuit pulling out of F1 or cash-strapped teams wallowing out of contention. We want raw power, driver skill, speed, excitement, noise and glamor!

Qualifying is at 3:30pm today. The race day is at 1pm on Sunday. Join me to watch it at The Green Man on the Big Screen, and prove me wrong in my predictions!

No security boost ordered for Songkran festival in Phuket, yet