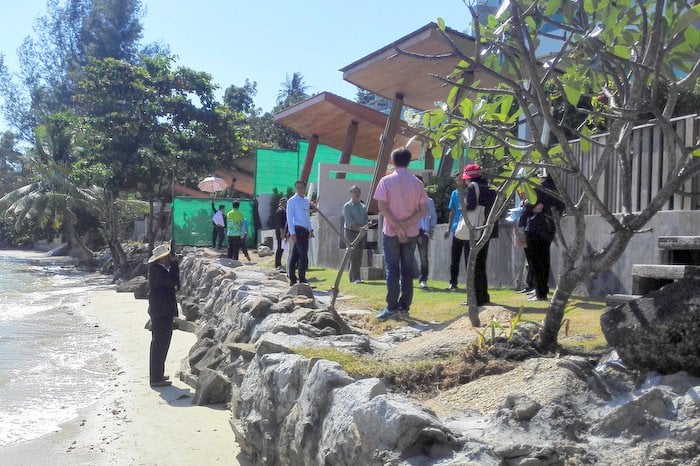 PHUKET: The management of The Eva Group has issued a statement in response to an inspection carried out earlier this year by a chief judge and a team of experts into an upscale property project under construction in Rawai.

Tawatchai Sontiwanit, chief judge of the recently formed environmental division of the regional Administrative Court responsible for Phuket, led the inspection ahead of a trial in which Rawai Municipality and the provincial standing committee for approving initial environmental evaluations (IEEs) and environmental impact assessments (EIAs) are named as the accused (story here).

Nitisak Chobdamrongtham of the Architect Council of Thailand joined as an expert witness.

The trial centers on whether or not the project in question breaches the building code and whether the building permits for the site were issued illegally (story here).

The statement was issued by a member of top-level senior management at Eva Beach Co Ltd whose identity was confirmed by the Phuket Gazette. However, the person declined to be publicly named.

In honoring Eva Beach’s right of reply concerning the circumstances surrounding the issuance of the building permits for the resort, the Gazette presents the statement in full, unedited:

“Eva Beach would like to explain and make the clear understanding to all Gazette‘s readers who have read the articles published on the 14-20 February 2015 issue that Eva Beach has legally constructed the buildings in the Project by obtaining the legitimate approval from the provincial standing committee of experts’ consideration of the Initial Environmental Examination (IEE) on 15th June 2010 and Phuket Governor, being the chairman of the committee, has signed on the approval letter to the Project on 16th July 2010. The committee was comprised of representatives from government agencies and private sectors i.e. Phuket Governor, Office of Public Works and Town Planning, Phuket Provincial Land Office, Government Marine Office of Phuket, Phuket Provincial Office of the Ministry of Natural Resources and Environment (MNRE) and Rawai Municipality etc.

“During the Committee’s meeting on 15th June 2010, nobody in the meeting, including the Office of Public Works and Town Planning of Phuket, disagreed or opposed to the IEE report or brought up that Eva Beach did not comply with the laws or any regulations. Thus, the Office of Public Works under Mr. Wongsakorn Noonchukhan did not object anything in the report of Eva Beach Project, and the meeting accordingly passed the resolution to approve the IEE report of Eva Beach Project, then Rawai Municipality, who is obliged to, considered and issued for us the building permit according to the building control act B. E. 2522 and Enhancement and the Conservation of National Environmental Quality Act B.E. 2535 (1992), all done by legal process.

“By obtaining the building permit, Eva Beach has legally proceeded the construction all along, the MNRE Phuket Office has also followed up the project construction after the IEE report being approved due to their policy and the officers did visit the project site for the inspection several times including the committee of Natural Resources and Environment of the Senate (the other government agency, apart from the ones who had attended in such meeting of approval), there is never an order to Rawai Municipality to withhold the construction of Eva Beach Project, consequently it points out that all government agencies did agree in the same way, is it possible that all government officers in all agencies did not act in good faith?

“The real problem of this issue is the difficulty of the government officers to consider the IEE report of the projects situated near the coastline according to the existing laws or regulations, not only Eva Beach Project who has to confront with this problem, but Eva Beach has been severely affected by the individual who lost the benefit, trying to use the laws and government officers as a tool, not as a good intention to act for the common interest as it was claimed.

“Eva Beach believes that many projects which are situated near the coastline will understand and sympathize the government officers, who are obliged to act according to the laws; the current issue which is not yet settled and creates difficulty to the government officers and private sectors is To determine the distance of the coastline in each local area as the topography is varied, with or without sand or beach, some with rocks or mountain slope etc. The key variant which always changes from time to time is the tide level influenced by the daily wind and waves due to the radical and rapid changes of global environment and climate resulting to the broader beach area or accretion by the deposition of soil at the coastline in some areas, or there might be no remaining beachfront area caused by the seawater erosion, that’s why the coastline area can be always changed, so we cannot use only the Global Positioning System or GPS: a space-based satellite navigation system to determine the exact location. When anyone requests the government officer to inspect how far from the site to the coastline in different time, it might be at time or lowest tide or highest tide, so the result will be different each other, even neighborhood areas. In addition, the notification of Ministry of Natural Resources and Environment “territory and environment protection measure for Phuket province B.E. 2546 (2003)” gave the definition that “coastline” means the line designated for the benefit of measurement according to this notification deeming the natural highest tide as the criteria. From the definition, there must be a government agency to take control and determine the distance from the coastline around Phuket Island to be in compliance with the said notification, so the Provincial Administrative Organization (PAO) of Phuket has initiated the project to inspect and pin the control traverse marks at the coastline around Phuket Island by evaluating the ordinary highest tide level from the statistics of the tide meter at Koh Taphao Noi (Phuket) measured station, Hydrographic Department under Royal Thai Navy for the purpose that the government agencies and officers can use as a reference for the distance of the coastline around Phuket Island. When POA completed the project, Phuket Provincial Office of the Ministry of Natural Resources and Environment (MNRE) sent a letter of request for the information of the control traverse marks to be used as a guideline for the consideration of IEE approval. After that, in the committee meetings to approve IEE reports for the any projects situated near the coastline, the committee of experts will refer to the control traverse marks made by PAO for the consideration whereas most people still do not clearly and correctly understand for the term of coastline.

“Currently, the government agencies are still unable to accurately determine the distance to be generally accepted among all government agencies and private sectors, so this is an oppressiveness of the officers; they are obliged to perform the job but if there is any mistake, they have to take responsibility. We hereby would like to plead for the understanding and sympathy toward the duty of the officers that they had to be blamed and got in trouble. Anyway, Eva Beach will not intervene the consideration of the judge at the Regional Administrative Court; it should be followed by the procedure of the justice which is quite meticulous and containing a lot of facts and concerning to many provisions of laws, it’s hard to clarify in full details.

“Lastly, Eva Beach believes that if there is the revision of laws and regulations to be coherent as a single criteria or guideline to perform the job, all parties will not get into trouble, the government officers can work pleasantly, nobody would like to corrupt upon the vagueness of the law without fear of what might happen.”