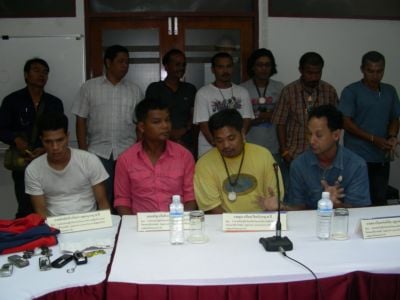 PATONG: Kathu Police on Wednesday night arrested four men for allegedly attempting to extort 100,000 baht from the Thai-Nepalese owner of a tailor shop.

The four suspects were presented to the media at a press conference at Kathu Police Station at 3 pm yesterday.

All were listed as residents of Nakhon Sri Thammarat Province except Udon, who is a resident of Phuket’s Wichit District.

According to a press release and statements by the intended victim, the extortion began when Pansak called Jiwan “Jim” Raithai last Saturday night and threatened to kill him if he did not pay 100,000 baht – or if he talked to police.

It was the first in a series of threatening phone calls made over four days to K. Jiwan, Managing Director of the “G Armani” tailor shop on Soi Kebsup.

Rather than give in to the extortionist, K. Jiwan notified Kathu Police after the first phone call and a plan was laid to snare them.

Police Region 8 Deputy Commissioner Maj Gen Santhan Chayanon and Kathu Police Superintendent Col Grissak Songmoonnark told the press that in the first telephone call Pansak told K. Jiwan that he had been hired by a third party to shoot and kill him for a contract price of 200,000 baht, half of which he had already collected as a down payment.

Saying that the intended victim had a “cute family” and that he didn’t really want to shoot K. Jiwan, Pansak offered to spare his life for a payment of 100,000 baht – and a promise not to contact police.

The threats continued the following night, with Pansak saying, “I am the guy who shot someone on Soi Kebsup seven years ago”.

On Monday night Pansak called again, this time saying that his employer was starting to rush him to complete the job because he had already two more targets lined up for him to kill and the delay was causing a backlog.

On Tuesday, the extortionist instructed K. Jiwan to provide him with a new debit card that he could use to withdraw 100,000 baht. K. Jiwan, trying to negotiate the amount down to 50,000 baht, was told he should pay a minimum of 80,000 baht and the balance “could be discussed at a later date”. He threatened to kill K. Jiwan “immediately” if he talked to police.

At 1 pm on Wednesday, K. Jiwan and his wife deposited 3,000 baht in the Siam Commercial Bank branch at Jungceylon, where the new debit card was issued.

About 5 pm, he was instructed to drop the card with a security guard near the entrance to the parking lot at Supercheap and to tell the guard that someone would be by soon to pick it up.

Johnnie Lek waited at a distance under a tree in front of the nearby Godzilla restaurant while Pansak and Udon went to pick up the debit card. After Pansak put the card in his pocket, police moved in and arrested all four men without incident.

After the press conference, attended by some 50 members of the ethnic Nepalese community in Phuket, K. Jiwan told the Gazette he was certain that all the threats were issued by the same man, K. Pansak.

“Pansak is an underling of Johnnie Lek, who is a Thai-Nepalese who has bullied many members of the ethnic Nepalese community here before. I was called from different numbers each time. I don’t know how many times he has used similar tactics to extort other members of Phuket’s Nepalese community,” he said.

The police press statement notes that the Phuket Nepalese Club on July 7 held a meeting in Patong during which Mr Jiwan was elected Vice-President. During that meeting Johnnie Lek, who was present, argued that the vote results be annulled.

Pol Lt Col Boonlert Onklang today told the Gazette that all four suspects were charged with extortion and are being held at Kathu Police Station.

Johnnie Lek and Udon have denied all charges. Pansak admitted making threatening phone calls to K. Jiwan, while Jareon admitted only that he had earlier traveled with the other three from Khao Lak to Phuket, but denied knowledge of any extortion racket.

Col Boonlert said no person had come to post bail.

It was too early to say how alleged extortion was related to the results of the July 7 meeting, he added.

Many ethnic Nepalese work in the Phuket tourism industry. Many are Burmese nationals who speak Burmese, Nepalese, Thai and English and use their language skills to run tailor shops or work as touts for tourism-related businesses.

Col Boonlert denied that Johnnie Lek or any other members of the gang were involved in a shooting on Soi Kebsup seven years ago.

“He only made that up to pressure K. Jiwan to pay up quickly,” he said.