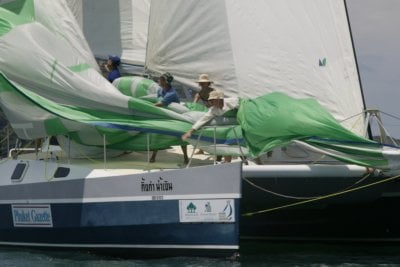 AO CHALONG: Scott Duncanson’s Somtam Express moved into first place in the IRC 1 class of the Phuket Raceweek regatta after finishing first and second in the two races for the class today.

Peter Ahern’s Yo! 2 was relegated to second place overall in the class after finishing third and fourth in today’s races.

Mick Kealy and his crew on Minx moved into third place in the class by finishing third and second in today’s two IRC 2 races, while Niels Dgenkolf on Phoenix slipped to fourth place overall.

Tim Milner on Seekronghuk still leads the Multihull class after winning both today’s races in the class, with Bob Brindley’s X Cat Riot in second place overall followed by Chris Runnegar on Chameleon.

Bill Phelps’ Twin Sharks is second overall in the class, followed by Henry Kaye on Mamba.

Although both races today started in light conditions, the breeze picked up as the afternoon went on.

“We gave them a coastal course, sending them out of the bay and then round Koh Bon, Koh Hei and Koh Ao. About halfway round the course the breeze picked up and some boats were crossing the finish line doing about 14 to 15 knots,” said Race Officer Simon James.

“The Fireflys were flying,” he added.

Racing continues tomorrow with the regatta drawing to a close on Sunday.

NOTE: The results posted here are the provisional results available at the time of posting to net. Click here for the latest results.

Extortion racket taken down in “sting’