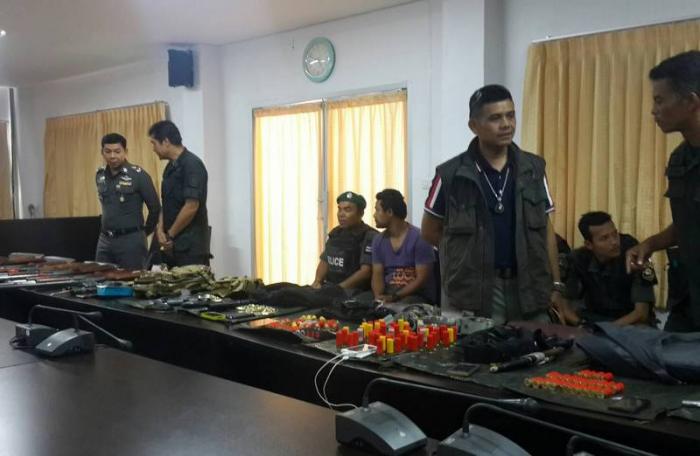 KRABI: Krabi Provincial Police yesterday arrested 16 ex-military and other security personnel with nine rifles, 10 shotguns, bullets and an array of other paraphernalia.

The arrest occurred in a palm plantation in Krabi Town that, until last year, was in possession of United Palm Oil Industry Public Company Limited (UPOIC).

Chettha Kaew-In, 43, was the main suspect, while the rest of the men worked under him.

“Mr Chettha told us that he and the others were employed to protect plantation workers from the locals residing there,” Lt Col Chumpon Kananurak of Krabi Provincial Police told the Phuket Gazette.

The colonel added that UPOIC continued to hire employees to live and work on the land, as well as harvest palm oil and fruits for their own benefit, despite the fact that the Krabi Land Reform Office had revoked the company’s ownership last year.

The men where charged with criminal association and possession of weapons. All suspects were taken to Krabi Provincial Police Station.

Police are investigating further in preparation for action against the company.

‘Mentally ill’ Phuket man blows half his head off