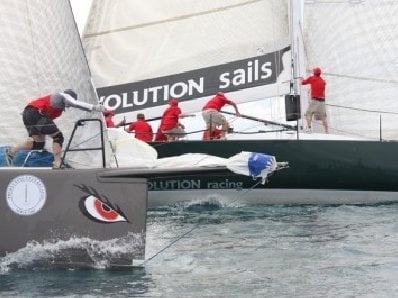 After placing fourth in the first race this morning, Evolution recovered to win the next two races.

“In the first race there was a big shift and two or three boats got the jump out on the right hand side of the course into a new pressure lane, and they got a big jump by the top mark,” said Roberts.

“We had a good start, but we were just too leeward of the new pressure vein that came through. HiFi, Jelik and Mandrake got a jump on us.

“Generally, though, we are pretty happy. The boat is going well and the crew are sailing the boat well. Some you win and some you lose,” Roberts said.

Evolution‘s traditional rival HiFi is now second overall in the class on seven points, after finishing second and fourth in the following races.

Yasuo Nanamori on Babe and Rick Pointon on JingJing are second and third in the class, with eight and 10 points, respectively.

Defending their IRC 2 title, Royal Thai Navy 1 recovered from a fifth-place finish in their first race to win the next two races and close the day leading the class on seven points.

One point behind and second overall in the class is Brent Morgans and his Men at Work.

Jamie Watts’ Team Sea Bees, also on eight points, are third in the class on a “countback” – as Morgans’ crew have placed higher in achieving their tally so far.

Light winds prompted postponement flags on both courses this morning, but the breeze blew in to over eight knots in the afternoon to power some fine sailing by the fleet of 106 boats.

The Phuket Firefly 850s enjoyed the conditions, especially Hans Rahmann, who is leading the class with five points on his catamaran Voodoo.

Pierre Forsans on Pagatoon is also on five points, but ranks second overall in the class on a countback.

Meanwhile, the first of the famed regatta parties gets underway tonight with the prize-giving ceremony at the Katathani Phuket Beach Resort at Kata Noi and Race Sponsor Kata Rocks hosting their first King’s Cup party.

Those looking for a good a vantage point to watch tomorrow’s racing are recommended to make their way to Laem Phromthep or Kata Viewpoint, as much of the racing is off the southern end of the island.

First race gets underway at 9am.

Full results of today’s racing are posted at kingscup.com