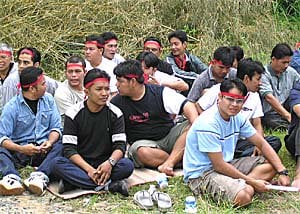 RAWAI: About 300 unionists on the staff of The Evason Phuket Resort and Spa staged a peaceful protest at the entrance today in a dispute over pay and conditions. Watched by Chalong Police officers, the demonstrators, many wearing red headbands, sang songs, pounded on drums and waved placards as guests moved unimpeded past the gathering. The protest began at 6 am today. Several hours later, management agreed to talk to union representatives again about a five-point proposal that was first discussed and rejected last month. Since then, talks have failed on five occasions. In an escalation of the dispute, the management, in a memo, told the unionized workers not to report to work from 7 am today. About 360 of the 500 workers at The Evason are in a hotel union, one of more than 20 that have been formed in Phuket’s hotels and resorts over the past year.