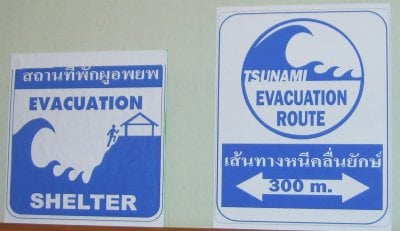 PHUKET: Tourists hitting the sands of Patong Beach early next Friday morning may find themselves in for a bit of a surprise, as the province plans to conduct a tsunami evacuation drill in the area at 10 am on April 29.

An “evacuation route map” and a variety of warning signs were presented Wednesday to a seminar at The Metropole Hotel led by Suntorn Liuluang, Director-General of the Office of Disaster Prevention and Mitigation,

Speakers at the seminar included Smith Thammasaroj, who was appointed by the Prime Minister to establish the National Disaster Warning Center (NDWC), and Phuket Governor Udomsak Usawarangkura.

As the Andaman coast’s most heavily developed tourist district, Patong was selected as the site for the pilot project for the NDWC warning system, which Center officials say will eventually cover the entire Andaman coast.

The evacuation drill will be in response to a theoretical tsunami-producing earthquake of 9.0 Richter-scale magnitude, with an epicenter near the Nicobar Islands in India – just 400 kilometers from Phuket.

Such a wave could reach Patong in 30 minutes. With ten minutes needed for the warning message to be sent and the sirens sounded, the evacuation woulf need to be complete within 20 minutes, the seminar was told.

Governor Udomsak Usawarangkura said that with an effective plan in place, it should be possible to evacuate people to safety within that time, whether the warning comes at day or night.

The March 28 earthquake and subsequent tsunami scare demonstrated the need to implement an evacuation plan as quickly as possible. This involved designating evacuation routes, training of personnel and installation of equipment, he added.

Dr Smith said that installation of NDWC equipment for Patong was already 90% complete and would be finished by the end of April, making it the first of its kind in the countries hit by the December 26 tsunami.

Three siren towers have already been successfully tested in Patong, though these have yet to be connected to the NDWC headquarters, which are located outside Bangkok.

Dr Smith said that the NDWC warning system for coastal regions of all six tsunami-affected provinces would be completed within six to 12 months.

This would involve installation of more siren towers, spaced at distances of 1.5 to 1.8 kilometers, all of which would be directly linked via satellite to the NDWC center in Nonthaburi.

In addition, the Meteorological Department would also issue tsunami warnings through radio and TV networks, he said.

Dr Smith said that extending the warning system to cover all of Phuket would involve the installation of 15 more warning towers. This could be accomplished within three months at a cost of 40 million baht, he said.

He did not elaborate on how just 15 siren towers, emitting signals audible at a radius of 1.5 to 1.8 kilometers, could cover the entire coastline – or if by “complete coverage” he was referring only to the west-facing beaches popular with foreign tourists.

The three warning towers in Patong were donated by their manufacturer at a cost of around 7 million baht, he said.

K. Smith, who faced ridicule when, as Meteorological Department director seven years ago, he lobbied for a tsunami warning system, added that if such a system had been developed at that time the lives of some 6,000 to 7,000 people in Thailand could have been saved on December 26, 2004.

Phang Nga Governor Anuwat Metheeviboonwut told the seminar that the first evacuation plan in his province, for Takuapa District, would be completed on May 10 and would cover Nang Thong, Bang Niang, Khao Lak and Bang Sak beaches.

He added that Phang Nga needs a minimum of 10 warning towers along its western coast between Tai Muang and Kuraburi Districts. In some areas evacuation routes needed to extend as far as two kilometers inland, whereas at beaches backed by hills, such as in parts of Khao Lak, the evacuation routes could be as short as 15 meters, he said.

Dr Smith noted that his department is looking into buying the necessary equipment for Phang Nga [and other provinces] and said that Prime Minister Thaksin Shinawatra was very keen to approve funding.

Also unveiled at the seminar were a variety of cardboard warning signs bearing symbolic representations of tsunami waves, along with evacuation instructions in Thai and English.

Responsibility for posting the signs will fall to Patong Municipality, which was represented at the seminar by Deputy Mayor Chairat Sukbal. He said the temporary signs, to be ready for the evacuation drill, would eventually be replaced by more permanent ones.

“We’ll use these until we get the permanent ones, which are taking a long time to get have made,” he explained.