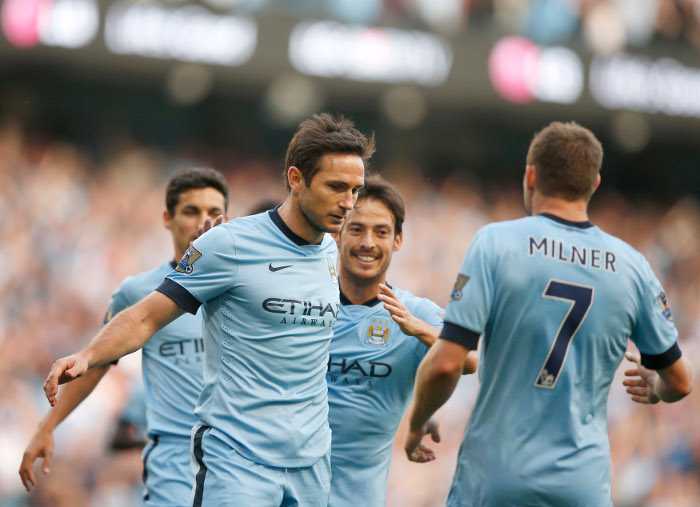 Manchester United dropped further down the table after losing 5-3 against newcomers Leicester City.

Barcelona and Real Madrid scored 13 goals between them during a memorable La Liga weekend, when Cristiano Ronaldo netted a hat-trick, while in Serie A Roma and Juventus kept their 100 per cent record.

Frank Lampard, Chelsea’s all-time leading scorer, netted against his old club when he came on as a late substitute for Manchester City to give the champions a 1-1 draw against the league leaders at the Etihad Stadium on Sunday.

Andre Schuerrle had given Chelsea a 71st minute lead, but Lampard’s strike ended Chelsea’s perfect start to the season though they stay top with 13 points from five games.

A remarkable game at Leicester saw the home side, promoted this season, twice come from two goals down to beat Manchester United 5-3 after a header from Robin van Persie and a wonderful chip from Angel di Maria had put United 2-0 up inside 16 minutes.

Leicester won with two goals from Leonardo Ulloa (one from the spot), a David Nugent penalty, and one each from Esteban Cambiasso and Jamie Vardy. United’s other goal came from Ander Herrera and they finished with 10 men after Tyler Blackett’s late dismissal.

Southampton, who won 1-0 at Swansea City, ended the weekend in second place on 10 points, level with Aston Villa, who are third, despite losing 3-0 at home to Arsenal. The Gunners climbed to fourth on nine points.

The rout lifted Real to seventh in the standings, six points adrift of leaders Barcelona who remain the only club to enjoy a 100 percent record in the league.

Lionel Messi completed a sparkling performance by chipping the goalkeeper from the edge of the area as Barcelona swept aside 10-man Levante 5-0 away to continue their winning start.

Neymar, Ivan Rakitic, Sandro Ramirez, Pedro and Messi were all on target although the Argentina striker also missed a penalty.

Champions Atletico Madrid were held to a 2-2 draw at home by Celta Vigo, who took the lead through an audacious backheel by Pablo Hernandez and fought back from 2-1 down to earn a deserved point. Atletico are third behind Barca and Sevilla, who were 3-1 winners over Cordoba.

Champions Juventus won 1-0 at AC Milan as coach Massimiliano Allegri enjoyed a winning return to his former club who sacked him eight months ago.

Carlos Tevez scored the only goal at San Siro as Juventus, who have not conceded a goal this season, maintained their 100 per cent record after three games while Milan dropped their first points.

AS Roma are the only other team with nine points after Mattia Destro and Alessandro Florenzi scored in the first quarter of an hour as they cantered to a 2-0 win over struggling Cagliari.

Verona went third with seven points after a 1-0 win at Torino. Rafael Benitez’s Napoli slumped to their second successive 1-0 defeat, this time at Udinese, and have only three points.

Champions Bayern Munich failed to break down battling Hamburg SV under new coach Joe Zinnbauer to draw 0-0. They are fourth with eight points from four games.

Moritz Stoppelkamp scored a Bundesliga-record 83-meter goal, firing in from deep in his own half as surprise packages Paderborn, promoted this season, beat Hanover 96 2-0 to lead on goal difference with eight points as well.

Last season’s runners-up Borussia Dortmund slumped to a 2-0 defeat at Mainz 05 and will also be without playmaker Henrikh Mkhitaryan for four weeks after he suffered a foot injury.

Bayer Leverkusen failed to recover from their midweek Champions League defeat at Monaco, losing 4-1 against VfL Wolfsburg with Switzerland international Ricardo Rodriguez scoring two goals and setting up another.

Leverkusen are on seven points, one ahead of Dortmund.

Paris St Germain drew their fourth Ligue 1 game of the season when they were held 1-1 at home by Olympique Lyonnais on Sunday as arch rivals Olympique de Marseille went top of the standings.

Marseille beat Stade Rennais 3-0 on Saturday and now have 13 points from six games, three points above fifth-placed PSG, who wasted a 1-0 lead against Lyon.

Edinson Cavani opened the scoring in the 20th minute, only for Lyon to equalize five minutes from time through Samuel Umtiti.

Also on Sunday, last season’s runners-up Monaco won their second game of the season in Ligue 1 by beating En Avant Guingamp 1-0, a result that lifted them out of the relegation zone.

Olympiakos, fresh from their 3-2 triumph over Atletico Madrid in the Champions League, topped the table for the first time this season after they ended Veria’s perfect start to the season by defeating the northern side 3-0.

Kostas Mitroglou opened the scoring from the penalty spot, before late goals from Jorge Benitez and Pajtim Kasami added a touch of gloss to a scoreline which was harsh on Veria.

Panathinaikos put their European disappointment aside to get their Super League campaign back on track with a thrilling 3-2 win over Platanias in Crete.