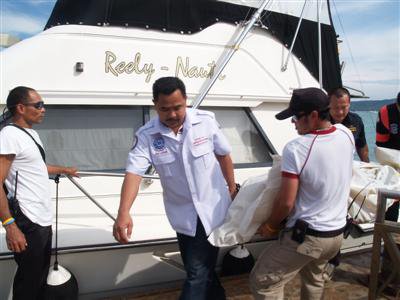 CHALONG, PHUKET: An Englishman died yesterday after the catamaran he was sailing in with two friends capsized off Koh Hei.

One of the survivors, 67-year-old English expat Bill Dobbs, told the Gazette that he and Mr Corrigan left Chalong Bay in the catamaran owned by another man identified only as ‘Peter’ at about 9:30 yesterday morning.

They had lunch on Koh Hei, but on the return journey, sudden strong winds broke the catamaran’s mast and caused the vessel to capsize.

All three men were thrown into the sea. Mr Dobbs and Peter swam to the surface, but Mr Corrigan never resurfaced.

The two men used Peter’s mobile phone, which had fortunately been kept in a waterproof bag, and phoned friends for help.

Within an hour, a speedboat reached the scene and brought the two survivors back to Rawai Pier.

Mr Corrigan’s body was later spotted by other speedboat operators who were ferrying Japanese tourists.

The speedboat operators were reluctant to pull a dead body aboard their boat and opted to radio the co-ordinates over the local marine band.

The sportfishing boat named Reely-Nauti, later came to collect Mr Corrigan’s body, which arrived at Chalong Pier at about 3pm.

Mr Dobbs, a seven-year resident of Phuket who lives in a villa at Friendship Beach, said Mr Corrigan was single and on a three-month trip around the world.

He arrived in Phuket, his first stop, about a month ago. He planned to leave Phuket on December 27 and travel to Ho Chi Minh City, where he had a Japanese girlfriend. From there he planned to visit Australia and Fiji before returning to England.