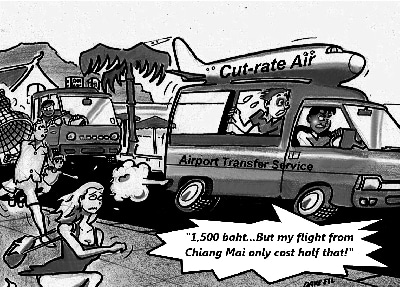 PHUKET: The past week saw the launch of the Gazette’s new readers’ forum that allows readers to post their comments on news stories. The interactive feature was an instant hit, with more than 120 comments in three days on a single story: the demand by a group of tuk-tuk drivers for a bigger slice of the transport pie at a popular Phuket resort.

Response to the story was overwhelmingly one-sided; as of this morning, not a single person has expressed sympathy for the drivers or supported them in any way. Rather, readers used the forum to charge the various transport organizations on the island with greed, collusion, price-fixing, aggressiveness, dangerous driving, illegally monopolizing public parking spaces – and more.

The general consensus seemed to be that the existing public transport system is keeping away tourists who would otherwise visit the island, unfairly costing the entire Phuket tourism industry untold millions – billions perhaps – in lost revenue.

Some noted that even Pattaya – a city famous for its jao por (‘godfather figures’) – was able to set up a successful, reasonably-priced public bus service suitable for tourists years ago.

The public transport situation in Bangkok, once a chaotic mess, has improved by leaps and bounds over the last 20 years, because free market forces and respect for the law have been allowed to prevail there.

Among the readers’ suggestions for solving the problem were setting up new public transport options, similar to the pink songthaews and green buses that will take riders just about anywhere in Phuket City for ten baht. And the Phuket Provincial Administration Organization that runs the Phuket City bus service says it would like to set up a similar route linking Phuket and Karon – but don’t expect it to happen any time soon.

Back in 1994, the last time someone applied for a private concession to run songthaews between Patong and Karon, the driver was pulled from the vehicle and badly beaten after just a few days. In the ensuing 15 years, nobody has applied for the route – even though the Transport Office has said many times it is still there for the taking.

Not all tuk-tuk drivers are bad. There are two sides to every story and the one-sided response to this latest one may to some degree reflect the Gazette readership demographic. Nevertheless, the latest incident and the huge public outcry over it should serve as a wake-up call to agencies, including the Tourist Police and Tourism Authority of Thailand.

Scores of the comments in our forum, from residents and tourists alike, urge government action.

Next year should see the opening of a new provincial bus terminal in Koh Kaew. Let’s hope the relevant authorities use that occasion to finally take steps to give everyone the public transport options they need and deserve. Residents are residents, and the tourists are, after all, our guests.