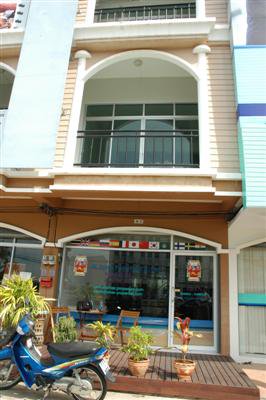 KATHU, PHUKET: Police investigating the murder of an Englishman yesterday suspect the killing may have been motivated by a real estate dispute.

At 10:30 am yesterday, Tung Tong Police were notified by security guards of a murder at the Royal Place project on Phra Phuketkaew Rd, at the Tesco-Lotus junction.

The victim was later identified as Ian Kenneth Stuart, 61.

Inside police found the victim’s body lying on his bed. He had been beaten on the head with a blunt object, which police have not recovered.

Inside the bedroom a chest of drawers appears to have been searched. A trail of blood drops led downstairs, where the intruders removed three panes from a glass window on the ground floor to gain entry.

Forensic investigators collected samples of dried blood taken from the walls and dusted for fingerprints from the glass and five bottles of rice whiskey found outside the building.

She said she felt something was amiss when she went to remove her laptop computer from a drawer and found it missing. She then found Mr Stuart dead in his bedroom upstairs.

Another company laptop had gone missing about two weeks earlier, she said

Describing the victim as quiet and non-confrontational, she said she had no idea what the motive might have been.

The attackers probably meant to kill Mr Stuart and locate something inside. If robbery were the motive, they would not have left behind valuables including his Rolex watch and gold ring. Miss Suttira’s work computer downstairs might have contained valuable information wanted by the intruder, Maj Gen Apirak said.

Police are also investigating revenge as a possible motive, as the victim was recently involved in a fight with local security guards, he said.

The murder was the second of a foreigner involved in the real estate business in less than a week, following the still-unsolved shooting murder of a Canadian last Thursday.