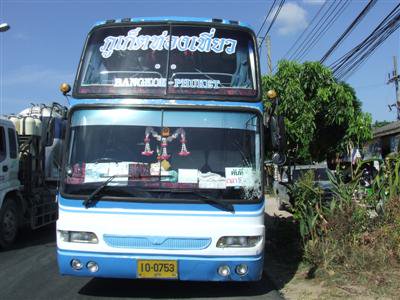 MAI KHAO, PHUKET : A 69-year-old grandmother was killed instantly this morning when a tour bus veered off the center of the road and hit her at high speed.

The victim, Mali Burakhan, was pushing her bicycle along Thepkrassatri Rd back to her home in Mai Khao Village 3 at the time of the tragedy.

The bus, a double-decked air conditioned coach operated by the Phuket Thong Thiaw Tour Company, was traveling southbound past the Hongyokbumrung School at around 8 am when its front-left tire burst.

The driver, 51-year-old Kanosak Manggorn, lost control and the bus veered to the left.

The bus traveled around 70 meters down the road before hitting Mrs Mali in front of a grocery shop near the entrance to Soi Darn Jid.

The bus was moving at about 70 kilometers per hour and the impact fractured Mrs Mali’s skull, killing her instantly.

The bicycle, caught under the bus, was dragged some 200 meters further down the road.

Mrs Mali is survived by two sons and two grandsons. Her youngest son, 32-year-old Kongfah Burakhan, told the Gazette that her body is being kept at a sala opposite the grocery shop in preparation for her funeral in the next few days.

The bus, which was returning from Bangkok, had no passengers aboard at the time of the accident.