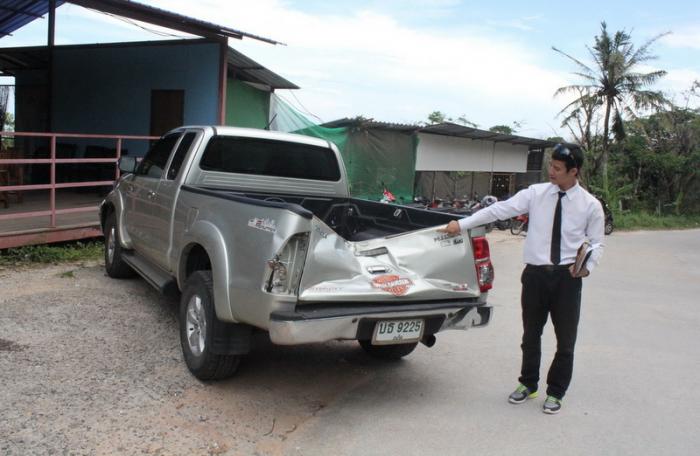 PHUKET: Visitors and officers watched in horror yesterday as an elephant became agitated during a blood test at a camp in the Nakkerd Hill, damaging a pick-up truck parked nearby.

The 15-year-old elephant, named ‘Plai Kong Thong’ was undergoing a general health and DNA check by officers from the Department of National Parks, Wildlife and Plant Conservation (DNP), who are currently investigating elephant trafficking on the island.

“A Toyota Vigo parked at the scene was damaged from the rear. The truck belongs to Apisit Doomluck, 26, who is a student at Phuket Rajabhat University and is doing an internship with the Muang District Office,” said Maj Thada Sodarak of Chalong Police, who arrived at the scene after receiving a report of the incident.

Plai Kong Thong was finally calmed down by his keeper and taken into the forest, away from the officials and tourists.

“Mr Apisit accompanied the team to check on three groups of elephants, 28 in total. While one of the officers was drawing blood for further testing, Plai Kong Thong suddenly became aggressive and rammed his head into the truck,” said Maj Thada.

Officers believe that the elephant got agitated when he saw needles and other equipment used to draw blood.

“He then began running, but his keeper managed to get him under control by using an elephant goad,” Maj Thada added.

An elephant goad, also known as a bullhook, is a tool employed in the handling and training of elephants. It consists of a bronze or steel hook attached to a handle, ending in a tapered end. The bullhook has historically been associated with elephant abuse and is banned in several places, including some states in the US.

Mr Apisak’s insurance providers are handling the compensation claims with the elephant’s owners.

BREAKING NEWS: One seriously injured after explosion on yacht