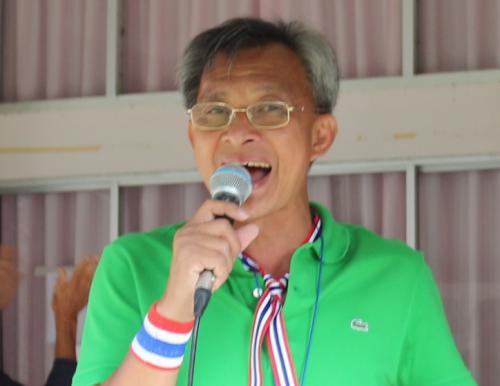 PHUKET: The Phuket blockade preventing any further candidates from registering to enter the February 2 national election held strong today, the last day for potential candidates to enter the election.

“We couldn’t even get inside the building this morning to open the center as the protesters blocked our way,” Kittipong Thiengkunakrit, Director of the Phuket office of the Election Commission, told the Phuket Gazette.

The blockade, led by protest leader Suratin Lian-udom, the former Mayor of Rassada, has been in force since registrations opened on December 28 (story here).

“At this stage, we have only one candidate registered to contest the election, Jirayus Songyos,” Mr Kittipong confirmed.

Mr Jirayus enrolled as a Pheu Thai candidate to contest Phuket Voting District 2 after being escorted into the community center last Sunday by an entourage of about 20 people (story here).

After Sunday, however, the protesters strengthened their resolve, forcing Mr Kittipong and Pheu Thai potential candidate Visit Jaiart to file two separate complaints about the blockade to Phuket City Police after Mr Visit was prevented from enrolling on Monday. (story here).

Today, however, Mr Kittipong did not call the police. “I have already filed a complaint. Once is enough. They are already aware of the situation,” he told the Gazette.

“Today was the last day for candidates to register to contest a seat in the February 2 election. We will report the problems we have had here in Phuket to EC officials in Bangkok,” he said. “What happens next is up to them.”

Protest leader Mr Suratin told the Gazette that the protesters will disband after 4:30pm today, the official closing time for all candidate registrations across the country.

“After today, we will go back to our homes, but if the Election Commission decides to hold further candidate registrations at other locations, we will be back,” he warned.