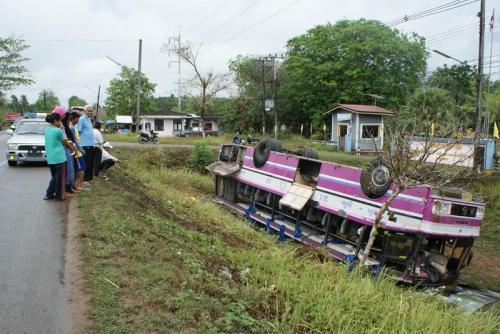 PHUKET: Eight passengers received minor injuries when a bus heading from Phuket to Trang ran off the road and overturned in Krabi on Sunday.

“Rescue workers rushed to the scene to find the bus on its roof in a roadside ditch about two meters deep.

“Arjara Tiewthong, who was on the bus with her children, said the bus could not slow down in time to pick up a passenger waiting beside the road,” Lt Panom said.

“The bus driver, Manoon Sengso, 68, said the road was slippery from the rain and he lost control of the bus,” he added.

Police are continuing their investigation into the cause of the accident.

“We will call the driver back for more questioning and we will again question the people injured in the accident after the Songkran holidays,” Lt Panom said.