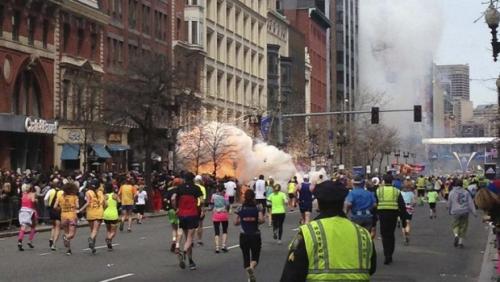 
Bombs kill three people, wound dozens at Boston Marathon
Reuters / Phuket Gazette
PHUKET: Two bombs ripped through the crowd at the finish line of the Boston Marathon yesterday, killing three people and injuring dozens, with some victims suffering amputations in what a White House official said would be handled as an “act of terror”.

It was the worst bombing on U.S. soil since security was tightened after the attacks of September 11, 2001, and President Barack Obama promised to hunt down whoever was responsible for the attack on a day when tens of thousands of spectators packed the streets to watch the world-famous race.

No one has been arrested and the White House official said it would have to be determined whether the attack came from a foreign or a domestic source.

Video showed that many runners were heading for the finish when a fireball and smoke rose from behind cheering spectators and a row of flags representing the countries of the participants.

The cheers turned to screams and panic.

“I saw people who looked like they had their legs blown off. There was a lot of blood over their legs. Then people were being pushed in wheelchairs,” said Joe Anderson, 33, a fisherman from Pembroke, Massachusetts, who had just run the race holding a large U.S. flag.

“These runners just finished and they don’t have legs now,” Roupen Bastajian said. “So many of them. There are so many people without legs. It’s all blood. There’s blood everywhere. You got bones, fragments. It’s disgusting. It’s like a war zone.”

Ambulances, fire trucks and dozens of police vehicles converged at the scene, and spectators could be seen crying and consoling each other.

A 2-year-old was being treated with a head injury at Boston Children’s Hospital, the hospital said in a statement.

“It sounded like a sonic boom. I haven’t stopped shaking yet,” said Melissa Stanley, who watched her daughter cross the finish line four minutes before the explosions.

The blasts put police on alert in major cities across the United States, including Washington, D.C. and New York City, sites of the September 11 attacks.

Four Boston area-hospitals contacted by Reuters reported a total of at least 74 hurt. The Boston Globe reported more than 100 people were injured.

About an hour after the 2:50 pm EDT (1:50am today, Phuket time) blasts in Boston’s Copley Square marred the usually joyous end to the marathon, and a fire erupted at the John F. Kennedy Presidential Library three miles away, but no one was injured, police said. Authorities were uncertain whether the fire was related, Davis said.

In Washington, Obama told reporters, “Make no mistake, we will get to the bottom of this and we will find out who did this.”

The U.S. Federal Bureau of Investigation, Justice Department, Homeland Security Department and other agencies were all investigating, authorities said.

Without knowing who perpetrated the attack, the White House said it was handling the incident as “an act of terror.”

The two explosions were about 50 to 100 yards apart as runners crossed the finish line with a timer showing 4 hours and 9 minutes, some 9 minutes faster than the average finish time, as reported by Runner’s World magazine.

Spectators typically line the 26.2 mile race course, with the heaviest crowds near the finish line.

Mike Mitchell of Vancouver, Canada, a runner who had finished the race, said he was looking back at the finish line and saw a “massive explosion.”

“Everybody freaked out,” Mitchell said.

The Boston Marathon has been held on Patriots’ Day, the third Monday of April, since 1897. The event, which starts in Hopkinton, Massachusetts and ends in Boston’s Copley Square, attracts an estimated half-million spectators and some 20,000 participants every year.

The Boston Symphony Orchestra canceled Monday night’s concert and the National Hockey League’s Boston Bruins canceled their home game against the Ottawa Senators. The Boston Red Sox had completed their Major League Baseball game at Fenway Park before the explosions.