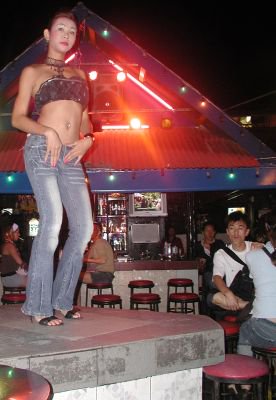 PHUKET CITY: Governor Udomsak Usawarangkura has revealed a long-suspected but until now unstated reason for the new rules mandating 1 am closure of entertainment venues – the need to reduce prostitution.

The Governor was responding to threats by entertainment business leaders in Patong to close their doors indefinitely from October 26 to protest recently introduced rules requiring venues in entertainment zones to close at 1 am, and venues elsewhere at midnight.

Gov Udomsak told the Gazette, “[The government] believes that there are many advantages to having a 1 am closing time, such as reducing the problem of drugs. There’s also the issue of human trafficking, which is the cause of too many women coming [from other parts of Thailand] to work in the ‘service industry’.

“If there were no entertainment venues in Patong I don’t think we would have thousands of women coming to work there.

“If we want to solve the problem of human trafficking, then we should [enforce the 1 am closing time] because this may reduce the number of women in the service business.”

Sompetch Moosophon, President of the Patong Entertainment Business Association (PEBA) retorted, “Human trafficking is impossible in Patong. Women coming here from other provinces are adults. They know what they’re doing. They have escaped from bad conditions at home, from poverty and problems that the government has never fixed.

“I don’t understand why the Governor has raised this matter. The statistics of drugs and under-age drinking can be checked with the police – there have been no reports of [these problems] in Patong.

“As for naked shows, why don’t they check if the police in the area are working properly? As long as I have been here, I haven’t see any show like that.

“The association and I will discuss this soon. The Governor should know what is truly happening in [areas under] his control. He must know the truth before he makes a decision. I do not know where he got the information that we are a source of human trafficking.