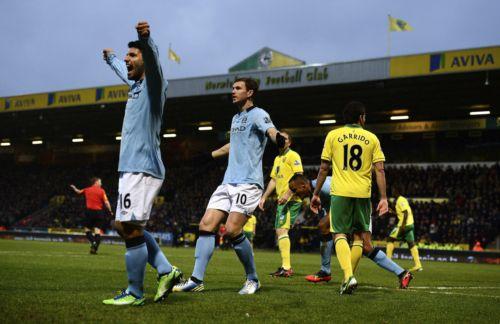 Roberto Mancini’s side ended the year which delivered their first Premier League title with a gritty 4-3 triumph over Norwich City, proving their high-profile players also have the mettle for a fight.

It’s early days in the long title run-in, but United, who travel to Wigan Athletic on New Year’s Day, are traditionally strong in the second half of the campaign.

Mancini, however, does not need to trawl the memory banks too far for inspiration as United threw away an eight-point advantage with only six games left to play last season.

“We showed we are there for the title,” Mancini said after his team displayed their steely core to beat Norwich despite Samir Nasri’s sending-off just before halftime.

“We won’t leave this title easily and will fight every game. With 10 players the guys were fantastic. For us, now it is not important to look at the table.

“We only need to work, to win as many games in a row as we can, and maybe in February we will look again at the table.”

Stoke’s trench-warfare approach may not win many plaudits from the aesthetically minded but they will certainly provide City with a physical challenge.

They are one of the Premier League’s most resilient teams and have gone 10 matches without defeat after clawing back from 3-1 down to draw 3-3 with Southampton on Saturday.

They are far from the league’s best travellers, however, having won only once away from home all season, and will be without suspended midfielder Steven N’Zonzi.

United, who kept a clean sheet for the first time in seven matches in the 2-0 win over West Bromwich Albion on Saturday, should be able to call on defensive reinforcements in Phil Jones and Rafael for the trip to Wigan.

Jones missed last week’s victory over Newcastle United after picking up a knock in the draw at Swansea last weekend, while Rafael has not featured since the Manchester derby this month because of a hamstring strain.

United’s 1-0 defeat at Wigan late last season was a major factor in their failure to win the title but it was their first Premier League loss to their north-west neighbours in 16 matches.

Two teams enjoying a renaissance following mid-season wobbles are Arsenal and Chelsea who have both won their last four league games.

Chelsea, who play Queens Park Rangers on Wednesday, should prove too strong for the league’s bottom club, having tightened up at the back under interim manager Rafael Benitez.

Chelsea goalkeeper Petr Cech is doubtful, having been withdrawn at halftime in Sunday’s 2-1 comeback win over Everton with a strained leg muscle, and there will be no John Terry who continues his recovery from a knee injury.

There was little sign of tightening up at the back for Arsenal as they shipped three goals against Newcastle on Saturday, but it mattered little as the Gunners showcased their full attacking armoury to find the net seven times.

Next up for Arsenal is a trip to Southampton where contract rebel Theo Walcott began his professional career.

Walcott, handed the central striking berth he craves, evoked memories of former Arsenal great Thierry Henry with a hat-trick that underlined his importance to the club and left manager Arsene Wenger hoping his contract impasse is swiftly resolved.

“My desire is to extend his contract; he belongs here and hopefully we can do it,” the Frenchman said.

Fourth-placed Tottenham Hotspur will be without Gareth Bale at home to Reading after the Wales winger picked up his fifth booking of the season and third for diving in the last month.

Ninth-placed Liverpool, whose spirits were raised following a 3-0 win at QPR on Sunday, host Sunderland on Wednesday, and Everton, in sixth, visit struggling Newcastle.