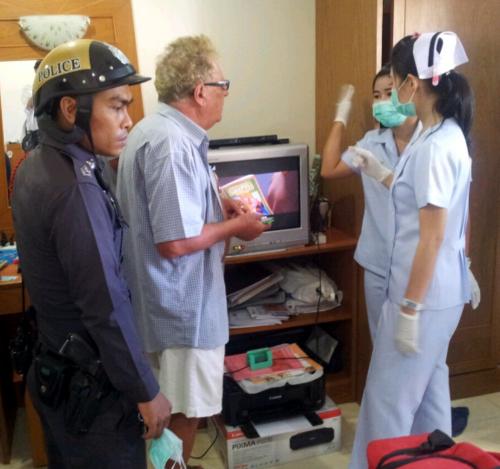 PHUKET: The 39-year-old Thai partner of a Dutchman was found dead yesterday morning with no specific cause of death confirmed.

At just after 10am, Hans Lehner, 68, called the Patong police to inform them that his girlfriend, Pranee Srijaem, had died in her sleep.

“I took the call. His girlfriend apparently died in bed while sleeping,” Patapee Srichai of the Patong Police said.

“We found Mr Lehner seated at a table in a distressed condition,” Capt Patapee said.

The body of Ms Pranee was still on the bed and covered with a yellow quilt.

“We did not find any signs of violence on the body,” Capt Patapee said. “We took her body to the hospital to determine the cause of death.”

Questioned by police, Mr Lehner said, “We went out the previous evening to eat somtam (spicy papaya salad with fermented fish). When we got back home, Pranee had a bad case of diarrhea before going to sleep.”

Mr Lehner told police that he tried to wake up Ms Pranee, but was unable to, and grew frightened when he found her hand was cool.

“We will have to wait for the autopsy result to come from the hospital to know how and why she died,” officer Patapee said.