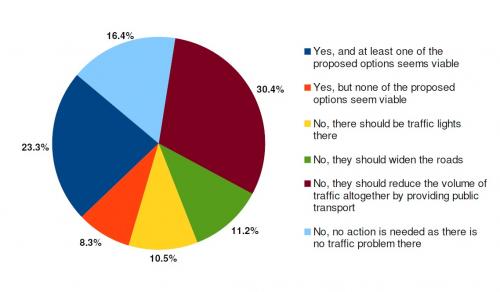 PHUKET: More than one-third of respondents to a Phuket Gazette online poll have voted to have an effective public transport system that reduces the volume of traffic on Phuket’s roads, instead of building an underpass costing hundreds of millions of baht at the busy Chalong Circle junction in the south of the island.

While introducing the six options, Governor Maitri pointed out that the new underpass will need to serve about 53,000 cars per day, accounting for about 60 per cent of all traffic in Muang District.

However, in response to the Gazette poll asking “Is an underpass the best solution for the traffic woes at Chalong Circle?”, 30.4% of respondents voted: No, they should reduce the volume of traffic altogether by providing public transport.

Nonetheless, the proposal to build an underpass did receive a firm base of support, with 23.3% of respondents voting: Yes, and at least one of the proposed options seems viable.

That figure was achieved without being the top preference in any one of the demographic categories available: Thai Nationals, Local Foreign Residents and Tourists / Visitors to Phuket.

It was also outweighed by the combined support for the three next most-popular responses: No, no action is needed as there is no traffic problem there (16.4%); No, they should widen the roads (11.2%); and No, there should be traffic lights there (10.5%).

Only 8.3% of respondents voted: Yes, but none of the proposed options seem viable.

To take part in the Gazette‘s newest poll, asking which brand of cola you think tastes best in Phuket, click here.

Cola wars: which one passes the Phuket taste test?