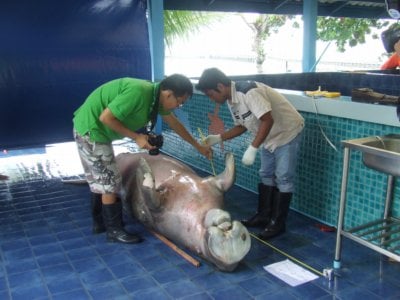 PHUKET: Following an eight-hour autopsy of the 40-year-old female dugong found dead off the coast of Trang on Tuesday, marine biologists say the animal died from trauma and exhaustion, most probably from trying to out swim or escape entanglement in a trawling net.

According to Phaothep Cherdsukjai, a researcher at Phuket Marine Biological Center (PMBC), examination of the dugong’s pulmonary system revealed that the animal had endured some kind of sudden and massive trauma while she had been grazing on the sea bed.

The signs of shock and exhaustion are most likely due to her trying to out swim fishing nets trawling the sea bed, said Mr Phaothep.

“We found sea grass in her mouth, so we believe the dugong was eating when she was killed,” he added.

Mr Phaothep explained that the dugong’s heart had been pumping flat out before she died, leading them to conclude that the dugong had been trying to escape fishing nets.

Dugongs, or sea cows as they are commonly known, exist almost exclusively on a diet of sea grass. Their grazing areas are protected as non-fishing zones as a way of trying to preserve the highly endangered species. However, entanglement in trawling nets and collisions with boats are most often blamed for the cause of death whenever dugong carcases are found.