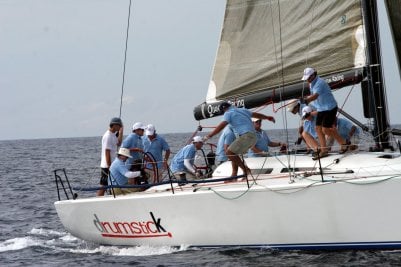 Nick Burns’ Mandrake, despite finishing sixth this morning, came third in the series.

In IRC 1 class, Octopussy staved off persistent pressure this morning to finish just 12 seconds ahead of Switchblade, with Ruby Tuesday coming third.

Although Octopussy and Ruby Tuesday wrapped up the series on 12 points apiece, top honors went to Octopussy as it finished first in three races. Switchblade ranked third overall with 14 points.

Moto Inzi was simply too quick in the Multihull 1 class, crossing the finish line some 13 minutes ahead of nearest rival Cedar Swan. Xcatriot came third.

Overall series results for the remaining classes are:

Sport Boats. At time of upload, protests were still being heard.