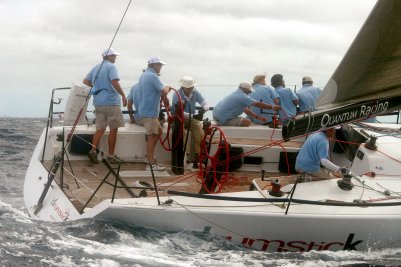 PHUKET: Ray Roberts’ Drumstick Quantum Racing will be aiming to make the most of its four-point lead over Neil Pryde’s Hi Fi in tomorrow’s final race of the Racing class of this year’s Phuket King’s Cup Regatta.

In winds gusting up to 14 knots today, tight racing saw Hi Fi win Race 6 by just 51 seconds over Drumstick, which in turn beat Mandrake by a minute. Mahligai finished fourth in the class with a corrected time of just two seconds behind Mandrake.

Ruby Tuesday leads the class with 9 points, ahead of Octopussy (11 points), Switchblade (12) and Rhythm Stick (13).

In IRC 2, David Lindhal’s La Samudra also had a close win, by just 23 seconds, finally beating Royal Thai Navy 1 with Master Blaster finishing third. Lt Peera Sagultem and his Royal Thai Navy 1 crew lead the series with 5 points, and are expected to pull out all the stops to beat La Samudra, which is 2 points behind.

However, Patrice III is by no means safe, as it is only one point ahead of Minx, helmed by Phuket’s own Mia Gillow, the only woman skipper in the regatta. Minx came fourth today.

In a demonstration of sportsmanship, Jakobsen has offered his boat for the crew of Yachtpro 106, which was battered out of the regatta in a collision with Master Blaster on Wednesday, so that they can complete the series tomorrow. All captains in the class agreed to allow the arrangement.

Scott Duncanson’s Somtam Express, despite finishing fifth in both races today, is in second place in the series with 18 points, followed by Happy Endings (20).

In the Multihull 1 class, Coco Blues made the most of Moto Inzi not racing today – repairs were being made to the recently launched Firefly catamaran – and finished nearly 13 minutes ahead of Cedar Swan. Xcatriot finished third.

However, Moto Inzi still leads the series with a two-point lead over Coco Blues (6 points), with Cedar Swan on 7 points.

Overall rankings in the remaining classes are: