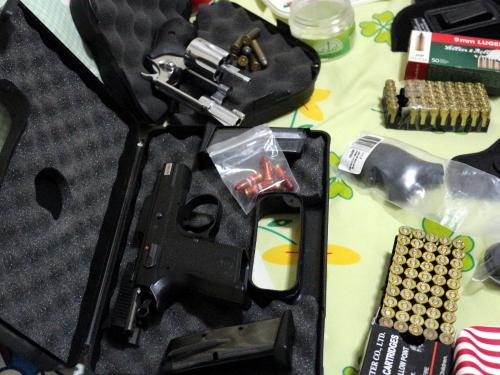 PHUKET: Drug arrests over the last two days have brought police closer to the source: a dealer based inside Nakhon Sri Thammarat Prison. Illicit guns and bullets bought online were also uncovered during the arrests.

Two suspects, Santi Nhuphoom, 31, and Anas Thongma, 23, were found with a total of 490 grams of ya ice (crystal methamphetamine) and three guns when they were arrested in Phuket Town on August 12 and August 13.

“On the night of August 12, we received a report from an informant that Mr Santi was selling ya ice to local teens, so our undercover officer arranged to buy 10 grams of it from him.

“When Mr Santi handed over the drugs, our officer identified himself. Mr Santi ran into a nearby house, but officers were able to catch him,” Mr Veera said.

“Mr Santi told us he bought all the ya ice from Mr Anas, who lives in Soi Sian Tai in Rassada,” he said.

The next afternoon officers raided Mr Anas’ house. They seized 480 grams of ya ice in plastic bags in his wardrobe, two handguns, 100 bullets and drug paraphernalia.

“They both bought their guns and bullets from Thai websites. They said they Googled ‘gun sales’ and were able to find a seller,” he added.