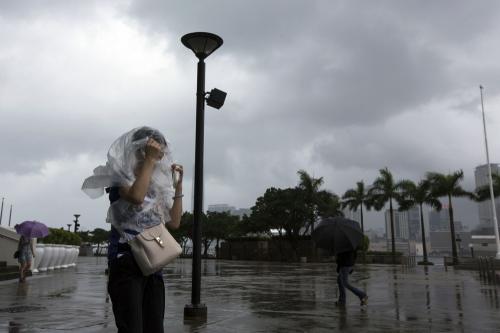 TMD chief Worapat Tiewthanom warned that Typhoon Utor was as powerful as Typhoon Gay, which ravaged southern Thailand in 1989.

With winds whipping up to speeds of up to 138kmh, Typhoon Utor was the strongest typhoon this year to ravage the Philippines, where six people were killed by the storm and 13 are still missing.

Mr Worapat said the strong southwest monsoon over the South, the Andaman Sea and the Gulf of Thailand would bring abundant rain and isolated heavy rain in coastal areas of the East, as well as the southwest coast.

Wind-driven waves in the Andaman Sea and the upper Gulf would reach up to two meters high and all ships should proceed with caution during this period.

In Chanthaburi’s Laem Sing district, two people were slightly injured from glass cuts and 15 houses in Tambon Bang Sa Kao were damaged – nine severely – in a storm on Tuesday night.

Homeowner Yupa Hongthong, whose roof was blown away, recalled that the storm hit suddenly while her family was sleeping on the second floor, but fortunately nobody was hurt.